Here’s a little mid-day Carnaval Update for you. I’m back at the house after being down at the square for about 3 hours. I’m hoping to hunker down, get something to eat, take a nap and then head back out tonight. We’ll see how that goes but for now here’s the haps…

The square is chaos. Controlled in many ways, but still chaos. The police monitor the entrances and check bags for any dangerous objects, so that’s good. But once inside the entrance it’s a bit of a free-for-all with alcohol everywhere (purchased there or brought in with coolers), people milling around and water. Everywhere water. There were 5 water trucks parked around the square and this morning there were taped-off water zones. If you were in the zone you were subject to a big dousing from the hose or fellow partiers with squirt guns. Outside of the zone you were less of a target but still you got wet if you were in the wrong place at the wrong time. Ashley, Zoe and I went in there to check it out with their squirt guns and once inside the zone I was soaked immediately. My waterproof iPhone carrier came in handy. The big water trucks were clearly diesel fuel trucks like I was told. They had “flammable” written all over them. But the truck that was spraying us had a certificate from the health department saying it was suitable for use during Carnival days. Unfortunately that was from 2012 but we can hope that it’s only been used for water since then, can’t we?

We quickly realized that our squirt guns were inferior and we needed the kind with the extra water tank you carry on your back. $20 and two trips to the house for money and water and we were in business. The girls basically sprayed everyone they could find but mostly the kids. There were kids everywhere and they were having a blast. No one was safe from water and no one cared if you sprayed them.

Once again Lucy saved the day. Her mom owns an ice cream shop on the square and they blocked off the outdoor eating area for their use only. We took that to mean our use too! So we hung out in there with Lucy which gave us a front row seat to all the action, allowed the girls to spray people and then duck, but also made us a bit of a caged-animal target for the guy in the shop next door who had a full-on water hose.

The water was meant to keep everyone cool on a hot day but it’s actually quite cool today. It’s a big overcast and we are having strong winds but still it was nice to get cooled off.

The queens showed up about mid afternoon. Evidently Arriba’s float clipped an electric line and the line went down so they would not allow the float to drive over it (electrocuted queen no es bueno) so the queen walked into the square and was hoisted onto the stage while the marching band who plays the music walked behind her. She hung out and danced for awhile.

Then Abajo’s float came down a different street and made it all the way into the square and was followed by her band. These are different floats than last night. I liked Abajo’s better today. It was Valentine’s Day themed with cupids and big red hearts. It was cute. And their band was in matching shirts today. They must have read my post from this morning and felt shamed. Rightly so.

Now that Abajo’s float had made it’s way in, Arriba had to come back for a proper round so they came through. Their float was a bunch of ballerina dancer type things. Cute but not themed. Abajo: 1, Arriba: 1.

The water trucks left around 3, I guess their work of cooling down the crowd was done and off they went, perhaps to refill from the lake…?

I’ll leave you with a few pictures from the day, including our lunch. Meat on a stick is always bueno. 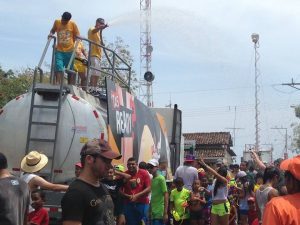 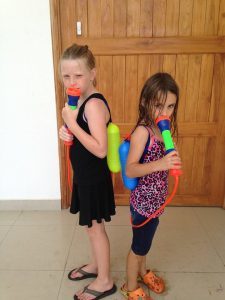 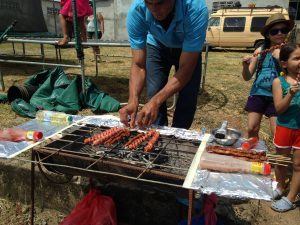 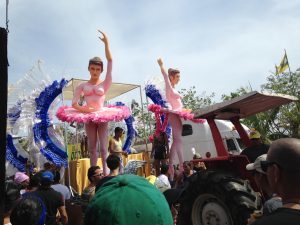