So here’s your Sunday update from Carnaval in Pedasi. Last night around 10pm we went down to the square to see what was going on and it was exactly… nuthin. The music had just started and it wasn’t even the disco music, it was some radio station or something. We hung out for a few minutes but then called it a night.

I went to bed at midnight and the music was thumping but it was not too loud. At 1:45 a.m. I woke up and noticed it was significantly louder and more thumpy, so the disco must have opened up. Thankfully it does not prevent me from sleeping. The music has somewhat of a regular pattern to it. The fireworks going off in front of my bedroom window are the challenge but there were no fireworks last night. At 4 am I woke up and all was quiet. Ahhhh.

This morning was the usual: the square was clean, workers were fixing up the stages, the water trucks were arriving but no music until about 11am. There were some different things about today. It’s HOT today. And there’s a breeze but not really a strong wind. But quite hot. Those water trucks probably emptied out fast. Then we noticed how it was very very busy today, much busier than yesterday. Cars were parked all up and down our street, people were everywhere, the square looked like a mosh pit. Thank goodness for Lucy’s (her family’s) shop that faces the square. Once again, we could see everything but we were protected from the crowd.

Zoe, Ashley and I went down once again to check things out. We got there just in time for the Abajo float to go by. Not too much longer and Arriba’s float cruised through. Today there was a little drama. Abajo queen got off her float up the road and stood on a makeshift stage on the side of the road. Arriba’s float went by her and there was all kinds of dissing going on, including back turning and booty shaking while the opposing band played furiously. It was hilarious.

Today’s floats were pretty similar to each other and I wouldn’t say either one was a clear winner so I’ll root for the home team and give it to Abajo. Abajo: 2, Arriba: 1.

Evidently there are two floats a day – one in the afternoon when the queen is usually wearing less clothing, and one at night when it’s lit up and she’s usually in a long gown. The one at night comes around 2 a.m. so we haven’t seen that one and probably never will. Last night Arriba said their car broke down so the queen came in without a float, but rumor has it their float was very similar to Abajo’s from earlier in the day so they scrapped it rather than look like copycats. It’s like a telenovela (soap opera for you gringos) down here, I tell you! For that reason alone I think Abajo might be pulling ahead in the game, but it was by sheer luck that Abajo’s Valentine’s float came first.

The afternoon siesta has not yet started but judging from the crowds around town everyone could use a little break from the alcohol and a good nap. I chatted with my neighbor across the street and she introduced me to her brother, who was three sheets to the wind. Not sure he’ll ever remember this weekend much less meeting me. She was dying to know what I thought of Carnaval and was so happy to hear I was enjoying it. These folks take great pride in their festivals and really want us to enjoy them too.

Tomorrow, Lucy will be taking Haley and Zoe to the festivities. It’s supposed to be the prettiest day with the traditional Panamanian dresses. With any luck Haley will take a few pictures and be our guest blogger for the day. Make her feel welcome, won’t you?? 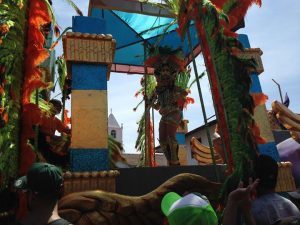 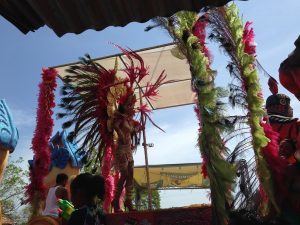