It is The Morning After – Day 1 and the party is just beginning. After dinner last night (another great one by Lucy, shared with the Smith Family), we went down to the square around 10 to see what was going on. At that point it was just the TV crew stage with a singer guy and two backup dancers, who looked very much like a boy band from the 80’s, and a very tranquilo crowd. Zoe and Ashley didn’t care what decade the guys were from, they were there to dance! Zoe convinced Al (panamadude.com) to be her platform and she boogied in the middle of the crowd on his shoulders. SIlly gringa girl! But thanks, Panama Dude!

The two queens started their procession (on floats) to the town square around 11. Arriba came first and they had a pretty classy float followed by the live marching band crammed into a cattle wagon. Cute, though! Not too shortly after that Abajo’s float started making their way down the street but they had a lot of problems with lights (ironic since Abajo has been having the majority of the power outages lately!) and then our queen had a real problem with her headpiece. It was huge (think Vegas show girls) and the wind last night was unusually strong. She was almost blown away several times so she had to change her clothes and take off the headpiece. They finally made it down the street to the square. They had a live band too with many relatives of my neighbors (they were practicing in front of our house while we were eating dinner). That vehicle had risers but the band members weren’t wearing matching shirts. So day 1 of the competition will have to go to Arriba, as much as I hate to say it. Their float was better, classier and their band was better put together. Sorry, Abajo, but there’s still time for you to step it up.

We got home around midnight (we = Zoe and Ashley and Candace and I – all other members of our family had bailed long before the floats even came out). We got everyone off to bed and it seemed like we had escaped a long noisy night but NO. Around 2am the fireworks started and I’m pretty sure they were going off right under our bedroom window. It was LOUD and bright. Those lasted on and off for about an hour and Phinny was not a happy doggie. His nervousness and pacing was probably what kept me awake the most. Then the disco started up and that thumping bass just cannot be drowned out no matter how many white noise machines you have going on. I probably fell fully asleep around 3:30.

This morning there’s not much going on yet. The square is cleaned of all trash, the little restaurants are cooking and guys are still working on structures and stages and stuff. I walked Phinny and any home that has a yard has a bunch of tents set up, including my neighbors. Many Panamanians move out of their homes and rent them to Carnival partiers for a tidy profit. Our friends The Smiths have rented out their second home (where the teens sleep) and their guests arrive today. The town feels like it’s getting a little overfull and I know this is just the beginning. A lot more people tend to arrive today from the city.

One complicating factor this morning is the wind. This is our dry season and we usually enjoy a very nice breeze that keeps things cool but today it’s downright STRONG and it’s blowing things all around. I’m watching my neighbors’ outdoor tin shower carefully lest a piece come off and decapitate me sitting up here on the balcony across the street. Decapitation no es bueno.

Today we hear the party starts up around 11. The music gets going and the water trucks arrive to spray you down to keep you cool. Conflicting rumors abound about this water. One theory is that they use lake water pumped into old diesel fuel trucks. Another theory is that the firemen use city water, which then depletes our water supply for the rest of the weekend. I guess we’ll find out.

I’ll post videos on a separate post to show you the two floats. But for now here’s Zoe and Ashley starting to fade last night while waiting at a little restaurant for Abajo’s float. And this morning the band members from across the street are getting ready to do something. Not sure what but it looks pretty interesting.

Stay tuned for more updates as the weekend progresses! When I’m not napping, that is. 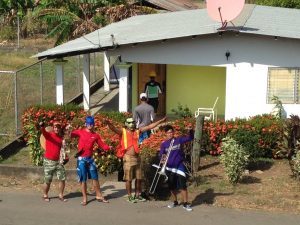 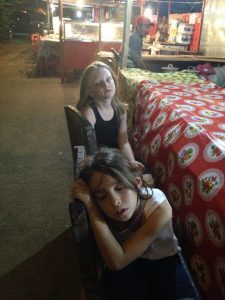 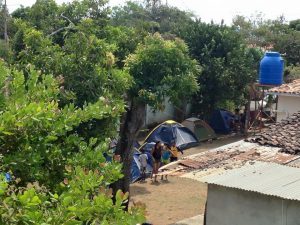