Deprecated: Return type of Requests_Utility_CaseInsensitiveDictionary::getIterator() should either be compatible with IteratorAggregate::getIterator(): Traversable, or the #[\ReturnTypeWillChange] attribute should be used to temporarily suppress the notice in /home/letsjust/public_html/wp-includes/Requests/Utility/CaseInsensitiveDictionary.php on line 91
 Small Town Fame – Let's Just Travel
Home  >  Panama • Pedasi  >  Small Town Fame

Part of being an expat family in a small town is being known to people whom you don’t know. And part of having kids in the local school means that there are a LOT of people who know them that they don’t know! Combine this with a small town where multiple generations of families live together or near each other and it’s like a huge social media web only in real life, not online.

Yesterday our friends The Smiths moved into their permanent houses down the street so Zoe and I went for a visit. On our way back we walked by a house with a large family lounging on the porch. We waved and said hello and soon caught up with a woman walking. Zoe thought she recognized her as the woman who did the “sexy dance” at the mother’s day party at school last week. I started talking to her and indeed it was the same woman. She told me it was a traditional dance from Colon, which is where her husband is from. But he doesn’t know how to do the male part so she had to dance with the only other male in Pedasi who knows how to do it. Her tone of voice told me very clearly how she felt about her husband’s lack of dancing ability. Even in Panama women complain about their husbands. ha!

I asked if she had children at school and she said she did, and described their ages, including saying she had one in Haley’s grade. At this point I was taken aback because I had not mentioned Haley and Haley wasn’t with us. But clearly this gal knew me, knew Zoe, knew Haley AND her grade. And she knew where we lived because she mentioned a relative who had worked on our house (sidenote: given how much work is still going on in this house and the compartmentalized nature of the labor force here, I’m pretty sure the entire town of Pedasi has at some point worked on this house!).

As we stood there talking we were joined by people from the lounging family, who were related to the dancing lady. A girl asked about Haley and said she was in her same grade at school. Again, surprising, since this girl had not been part of our earlier conversation but clearly she knew that Haley was related to me. It’s one of those “duh!” moments but it’s hard to remember. You just assume that if you don’t know people, they don’t know you right!?. It’s like a memo went out about our family and I didn’t know it. I think the same memo mentioned which days there would be no school because school is now out for the “summer” until March. We found that out Tuesday morning when we showed up to an empty school.

And I had yet another reminder that if I just open my mouth and starting talking to people, I make instant friends. Haley and Zoe always teased me about how I talked to store clerks in Arizona but I see now it was just training for Panama! Yesterday I talked to the neighbor across the street about her Christmas decorations, her daughter who can help Haley with algebra and the two houses being built next door to her. I talked to the guy who worked on the water pipes about some beans growing nearby and how he also did the electrical work on our house. And then of course the dancing lady, who is somehow related to the water/electrical guy. And her husband is friends with the property manager for our house.

Just from these conversations yesterday we have already been invited to the neighbor’s house for Christmas, the water/electrical guy wanted to give me his phone number in case I had any problems with the water, and the girl we met on the street asked if Haley wanted to walk to the Christmas party at school today (there’s no school but there is a party!). I’m insisting that the girls wave and say HOLA to everyone they meet and see. And I type this from the balcony of our new house that overlooks a fairly active street. There have been lots of “holas” already this morning and it’s barely 7 a.m.

Here’s a picture of Zoe on her bike going down to The Smiths’ house. We aren’t in Gilbert anymore! 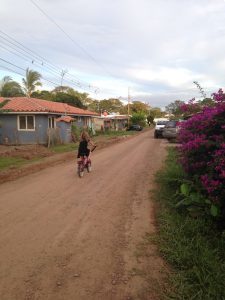