Deprecated: Return type of Requests_Utility_CaseInsensitiveDictionary::getIterator() should either be compatible with IteratorAggregate::getIterator(): Traversable, or the #[\ReturnTypeWillChange] attribute should be used to temporarily suppress the notice in /home/letsjust/public_html/wp-includes/Requests/Utility/CaseInsensitiveDictionary.php on line 91
 Casa Blanca, Casa Concrete – Let's Just Travel
Home  >  Panama • Pedasi  >  Casa Blanca, Casa Concrete

Today’s update has been brought to you by the word WHAT. Specifically followed by a bunch of question marks. As in “WHAT did you say????”

We moved into our new house on Monday. We are renting a two story duplex smack in the middle of town. From our balcony you can see the outdoor discotheque, the main church and the big grocery store. It’s all here!

The duplex is one large rectangle made of concrete and floored with tile. The downstairs is open except for one wall that spans about 5 feet that separates the front entrance from the living room. Other than that it’s one big room. Did I mention it’s all concrete and tile? So that means we can’t understand a word each other is saying if we are more than 5 feet from each other and if we aren’t facing each other. Sound bounces around the interior so much that you get delayed audio inputs as well as the direct one, so unless you’re speaking slowly and directly, you’ll most likely hear “What?” in return. And don’t get me started on knocks at the door. If we hear a noise at all over the a/c, fans and roosters, we have no idea where it’s coming from. Daniel got a doorbell the other day (the wireless kind). There’s about a 50/50 chance it will be used if a Panamanian is at the door.

But we like it. (Dan would add the conditional “for the most part”). The girls have their own rooms, I have a huge kitchen, a laundry room (no more mean laundry lady!), a cable service with several English speaking channels (we are watching a lot of Big Bang Theory reruns) and a/c in all the bedrooms (and soon to be in the living room too). It’s brand new and it’s clean. And I love all the activity. Yesterday I was watching the water line being laid in front of our house, our neighbors across the street decorating for Christmas and the construction happening across the street to the left. It’s fun to be in the thick of things. When it’s party time and the fireworks are going off 1 block away and the party lasts all night it will probably be a little less fun.

Dan is working hard to add in a few comforts from home. He’s trying to find a good desk for his work. We will be fencing off a small side yard for Phinny and we are contemplating several options for a place for the girls to play Wii and socialize without being shushed from the adults. You might scoff that we came all the way to Panama to play Wii? Well, you try coming all the way to Panama and having nothing familiar. Ha! We want to give the girls a few things that are normal, and Wii is also a great game to play w ith friends who do not speak your language. There have also been quite a few poker chip boxes coming home from trips to the store so I foresee a poker game in our future. We certainly have the space for it!

Being in the middle of town also allows for the girls to easily head out on their bikes and meet up with friends. And we find that they have a lot of friends, whether they know it or not. I have a feeling the doorbell will be used a lot once a few of those kids figure out where we live. And that we have a Wii!

Last night was our inaugural dinner in our new home. What was for dinner? Chicken and rice! 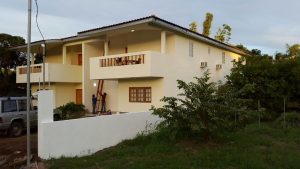 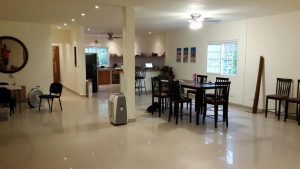 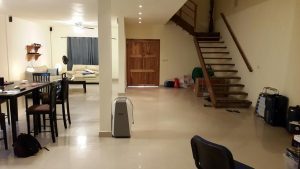