Deprecated: Return type of Requests_Utility_CaseInsensitiveDictionary::getIterator() should either be compatible with IteratorAggregate::getIterator(): Traversable, or the #[\ReturnTypeWillChange] attribute should be used to temporarily suppress the notice in /home/letsjust/public_html/wp-includes/Requests/Utility/CaseInsensitiveDictionary.php on line 91
 Cambutal – Let's Just Travel
Home  >  Panama • Pedasi  >  Cambutal

We’re moving into our new permanent rental here in Pedasi, tomorrow! Yeah!! There are still a few things that need to be done before we can officially get the keys. The waiting has been a bit frustrating so when we got an invitation to go to another beach for a weekend with three other families, we thought it was be a great idea.

We booked a room at one of the three hotels. The other families had filled up the beach bungalow hotel but in the end it worked out well because we were able to use the facilities at both hotels for all of us. We were a party of 14 with two boys ages 2 and 5 and 4 girls ages 7, 8, 11 and 12. So that worked out quite well for us!

When we first got there we alternated between the surf and the pool. The waves are great for boogie boarding and surfing at high tide and the pool is great when it gets to be a little much and/or the little sand bugs come out at sundown. (The pool also seems to attract frogs, which we fished out of the pool on several occasions.) It was raining a little but it didn’t much matter. When it rains here, it just means the really hot weather takes a break. But it never really gets “cold”.

The first evening we met up with the other families for dinner at their hotel. (And by hotel, I mean 3 cute huts on the beach with a meeting area to eat under a thatched roof.) It was a good meal but the food was a little too different for our picky eaters. There was another picky eater in the group (5 year old Mikey) so our kids got to have a peanut butter and nutella sandwich courtesy of Mikey’s Dad. (He was thankfully prepared for picky kid eaters!) Our kids thought they’d died and gone to heaven!

Saturday was pretty much non stop water play. The sky was overcast so that was actually very nice and kept the temperature a little lower. The kids did paddle boarding, kayaking, boogie boarding, some surfing and then a lot of pool time too. It was 7 hours of non stop water fun. We finally had to shut it down around sundown when the bugs were getting a bit much and the adults were ready to head in and get cleaned up.

Some of the highlights… we were on the beach when some cowboys with their herd of cows coming from our right and eventually passed right in front of us. We had one of the canoes on the beach in front of us which was scaring the cows. Plus we had a stray dog that was hanging out with us the entire day, that went CRAZY barking at the cows and so the cowboys were having a difficult time keeping the herd going in the right direction. One cow even make a break for the ocean because he was so afraid of the dog. So the cowboy had a heck of a time convincing the cow that it was safer to go forward than it was to go out to sea. Daniel finally helped them out by grabbing the collar of the stray dog and holding him in place while they passed in front of us. Of course, all the cows were stumbling over the canoe, too. It was definitely a site. The dog was still going crazy and Daniel had a heck of a time keeping him back. Luckily, he didn’t think to bite Daniel.

One of the highlights for the girls was a lovely cocker spaniel puppy named Lucas, who belonged to the manager of our hotel. He was great entertainment for the kids, even when he got a hold of Zoe’s breakfast. After he swiped Zoe’s meal and got caught trying to swipe more food later on, Lucas got put in the office during mealtime. Lucas was NOT happy about that. The not so highlight was the bugs called “no-see-ems” that seemed to love me (Allison) in particular and did not seem to care one iota if you had bug spray on. I’m still recovering from the no-see-um bites I got when we went to Bocas del Toro. So I think I’ve got a long road ahead when it comes to sundown beach activities. Thankfully, they are only out at sunset and sunrise.

We thoroughly enjoyed getting to know two other families who live in town and a third family who visits here a lot but lives on a tiny island called Utila, in Honduras. Which, of course, is now on our list to visit! Anyway, it was a great way to pass the time until our rental is ready. A great time was had by all.

On a sad note, a new friend of ours here in Pedasi died on Saturday, while trying to swim across a river that goes into the ocean here in Pedasi. It was high tide and evidently he misjudged just how difficult it would be to swim across and he was alone at the time. We only met and talked to him twice since we arrived, but he was going to be our back fence neighbor in the new house and we were looking forward to getting to know him more. RIP, Dino.

I am currently writing this from a dark house. The power went out about 20 minutes ago. We are hoping it comes back on soon. This is the second longest we’ve had it go out since we been here. It might be a long night…

P.S. We went to Las Tablas for dinner to wait out the power outage. But we’re back now and the power is back on. We passed what appeared to be the problem on our way to Las Tablas. The power guys were working on a pole that appears to have either been run into by a car, or maybe struck by lightening. There were wood chips everywhere on the road. Another interesting week in Panama.

P.S.S. While editing this for the final post, the power went OFF AGAIN but was only off for about 10 minutes. Whew! I better get this posted before something else happens. 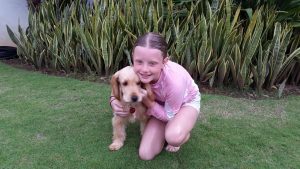 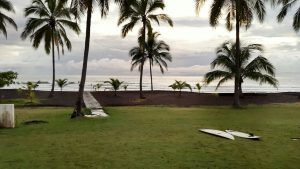