There was no school today (shocking!) but instead there was a Mother’s Day fiesta. Mother’s Day is on Monday here (I think I’l be celebrating it on both USA and Panama schedules!) and the school sent home a little invitation for all mothers to come to a special presentation. The girls went with me, but it seems like most mothers went without their kids.

The invitation said it would start at 11 but no one was surprised when it started at 11:45. It was held in two classrooms that had the folding wall between them removed to make a bigger room. We sat in student desks. When we got there all the mothers gave their names to the check-in ladies and they wrote them on a pink little slip of paper. They all got a good laugh trying to spell my last name. I learned later that those were for the drawing to give away gifts. My prayers were answered when my name was not called.

I tried hard to just blend into the background but of course that wasn’t really possible. Interesting observation… in the 45 minute wait to start I noticed that NO ONE was on their phone. That would be very different if it was the USA. They had phones, they just weren’t on them. I also noticed a small group of ladies mocking an indigenous mother who arrived (the indigenous women wear a particular style of dress so they stick out even more than I stick out.) I could not tell exactly what happened but based on tone of voice and body language from both parties, it seemed like there was some derogatory laughing and remarking when the indigenous woman was taking her seat. And it wasn’t subtle either, it was from across the room. That made me sad but it’s something I had heard is prevalent here.

The fiesta got started and it alternated between poems, some dances by a few of the students, more poems, drawing the pink slip names to give away some gifts, more dances and poems, a prayer, two party games that were reminiscent of a bridal shower, some lip syncing by some dude, some sensual type dancing and then we were invited to have chicken and rice and orange tang type drink on our way out. The entire thing took about 2.5 hours and it was pretty warm but not bad.

It takes a lot of energy to try and understand what is going on in a 2nd language while at the same time feeling uncomfortable about how different you are and trying to blend in at the same time. I was happy to get home but very glad I went. It is possible – not sure but I think – that the principal remarked about our girls attending school there when she was giving one of her speeches. She made some comment about foreign students attending school while here on vacations in Panama and how they were learning a lot every day. I’m pretty sure that was about us although we’re not here on vacation. Again, my prayers were answered that I did not have to stand up or be recognized in any way. The Principal is very sweet and made it a point to say hello after the event.

After it was over I asked a lady next to me to clarify something I heard about a party next Thursday. After that I got a few more smiles because people realized that I spoke (some) Spanish. So now I’ve learned that next time while I’m waiting I should be friendly and strike up a conversation with someone. I also know that I may see more people I know in town. Or at least they’ll see me. Yet another benefit of attending the local school is meeting people who live here. Another benefit is that Zoe is currently down the road playing at a girl’s house who goes to the school. The girl is not in Zoe’s class but she knows of Zoe. It’s funny to be known to more people than you know. With Zoe’s blond hair she’s pretty well known.

Here’s a video of the sensual dance, and a picture of Haley with her school friend who was one of the dancers.

We don’t have school tomorrow (yes! really!) so we’re headed to the beach again to stay at a fairly remote beachside hotel for the weekend. It’s what we do! 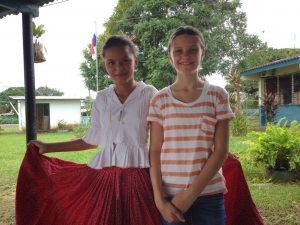