Today is Panama’s Independence day from Spain. This wraps up a long month of a bunch of holidays, starting with Halloween and continuing what seems like every other day since then.

Panamanians sure do love a parade. With every holiday they have some kind of parade. But because the parades in small towns have bands from schools in neighboring towns, they stagger the parade days so that the bands can go to different places on different days. This means that 1) you never know if your daughter’s class will be in session because they might be going to a parade (as opposed to your other daughter’s class which is cancelled because the teacher has dengue fever, but that’s another story) and 2) you never know if you’re going to get stuck behind a parade, or busses going to a parade, or people walking home from watching the parade and 3) you never know what business might be closed because of the parade, or the parade eve, or the day after the parade. Or because there’s no power, but that’s another story.

Other than parades, Panamanians love fireworks. And here they sound like gunshots. Fireworks are legal and Panamanians do not feel like they have to go off only at night. 4:30 in the morning? Sure! 1:00 in the afternoon? Yes! Every hour on the hour in between? Por favor!!

We’ve been passing the time with the girls out of school for this unplanned long weekend with poker. Dan taught us all to play and the girls have been begging to do it all the time. Dan thought it’d be a great idea to give them a challenge: if one of the girls managed to win all of Dan’s and my chips, we’d buy them bikes. I lost my chips early and then Dan lost it all to Haley with her pocket queens. Now Haley has a new bike! Zoe’s will follow shortly. We were going to get them bikes anyway, but Dan thought this would put it off for a bit. He was wrong.

We had to go all the way to Chitre to find the bike Haley wanted and in the end we bought it at the pharmacy, which was in the one and only mall. We were lucky because most places were closed yesterday, especially since we didn’t get out of the house until 3pm. We’re evidently fitting right in with the whole “lounging around” that Panamanians love to do. One of us still needs more practice (read: me) but I’m working on it. Practice makes perfect, even with lounging.

Here’s a picture of Haley’s new bike. Haley is not pictured because she’s busy lounging. 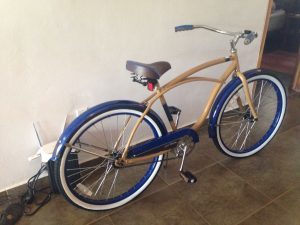