On Tuesday night (after the infamous “risk our lives getting home from the beach” incident) as we were getting ready for bed, the power went out. This isn’t uncommon but we noticed it didn’t come back on right away like it usually does. Wednesday morning we woke up and it was still off. Thankfully it was a cooler than usual night so there wasn’t much issue with lack of a/c or fans although it was slightly toasty. Anyway, we figured something major had happened due to the long and hard rains we received the day before.

I wasn’t sure how to tackle getting the girls ready for school with no power and no water (water is on an electrical pump although we finally figured out that we did have water because of a storage tank… but I digress) and I was pretty sure school would be cancelled anyway so we did home schooling for a few hours. By noon it was getting pretty hot and there was rumor that the power could be out until the evening. Dan took no chances of going even one more night without a/c so he booked us a hotel room at a surfing beach down the road. Of course it showed that it had wifi and a/c.

Off we go to the beach hotel but first we headed north for gas and we saw the workers on two different power poles, which is where we heard the issue had occurred (turns out it was a landslide). On our way back from getting gas the workers were gone so we figured the power would be back shortly, but we still headed to the beach, which was further south of Pedasi.

We got to our hotel and learned that the power was out (given that it’s south of Pedasi, which is south of the problem, this was not surprising in retrospect.) At this point we are not even planning ahead by Panamanian standards but instead have to take it hour-by-hour. We decided to have lunch and play at the beach and see what happens after that. This is the hotel with our favorite pizza, and of course we were happy to hear about the gas ovens. Thankfully by the time we were done with lunch the power was back. Yay!

We played and walked on the beach for a few hours then headed back to our room to clean up. It was a great room – bunk beds for the girls, beds for D and I and everything was super clean. And of course the a/c was lovely and worked fast due to the smaller size of the hotel room. This is a beach hotel so they didn’t even have blankets on the beds- just sheets. I liked the cleanliness aspect of that but wish I had known it was BYOB (blanket)!

We headed out to hunt down some dinner but ended up having pizza again. This is a pretty isolated beach and it was a Wednesday night and it’s not “wave season” (when all the surfers show up) so the only other restaurant nearby was closed until the weekend. I’m not too proud to admit that at this point I am getting cranky. The minute-by-minute planning, the lack of gluten free options for me (and already risking it by having the pizza for lunch) and the girls missing yet another day of school on Thursday was all aggravating, albeit only to me. I also was unsure about how we were going to get any breakfast and definitely didn’t see any morning cup of coffee on my horizon.

After dinner (pizza for them, a few salad remnants for me, and I do not like salads) we pulled out the dining/homework/puzzle/poker table we brought from Pedasi and re-started our Sherman Family Poker Holiday Tournament in our surf hotel room. That went well, especially when Zoe lost all her chips and I gave her mine so I could go to bed. Like I said, I was cranky.

This morning I was the usual lone early bird (sometimes I swear I think I should belong to a different family!) but I did manage to see breakfast being served and people drinking coffee. Yes! So in the end we all had a great breakfast of fresh eggs, fruit, juice and toast, along with two great cups of coffee for me. Things are looking up.

Since check-out wasn’t until 1pm (and it’s a surf hotel during low season… we could have checked out at 6pm and they would have just said “whatever, dudes”) and we missed school anyway, what a better way to spend Thanksgiving than in the waves? An hour or two of boogie boarding followed by some time in the pool (playing the Sherman version of quidditch) and a good time was had by all. All’s well that ends well.

Now it’s time to get back to our little house, figure out how much food we have to toss from 18 hours with no power, and squeeze in a little homeschooling before bed.

Our Thanksgiving dinner? I’m betting on chicken and rice! I’m sure the pilgrims would approve. 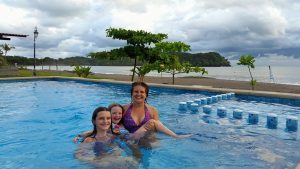 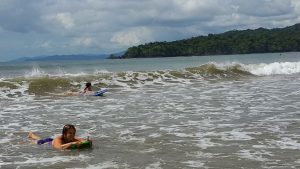 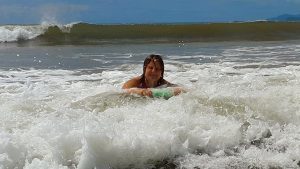 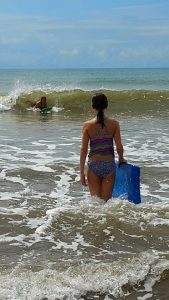 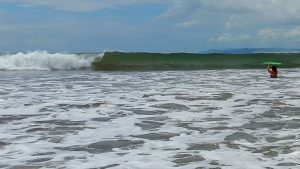 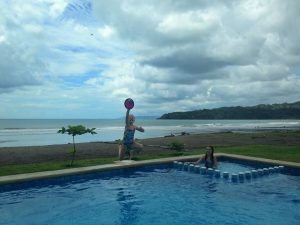