Since moving to the duplex our social calendar has definitely filled up, relatively speaking. Around the same time we moved in here the Smith family moved into their homes down the street. There are a lot more impromptu social activities that have been keeping us busy and keeping me happy. Another expat family the Fullers own a hotel here in town and they frequently arrange for their guests to go fishing. When their guests catch something (and they always do – tuna and mahi mahi have been the latest ones) we are usually invited to an unplanned fish bake potluck at their house. We’ve met a lot of interesting people and the kids have spent a lot of time in the Fuller’s backyard and with their 5 year old son. In Alaska, when the girls and I visited Nanna last June we saw a lot of people fishing and a lot of services that would cut and pack your fish for you, store it on ice and check it as luggage back to your final destination. That doesn’t happen here. At all. So the guests usually enjoy the fish at the Fuller’s and the rest of us enjoy it too.

Last night after yet another fish bake (which was scrumptious) we came home and I checked out the Mass at the church down the street. It was very very pretty inside and I ran into several locals that I knew, including the adult daughter whose mother lives across the street. She gave a few of the bible readings at Mass. After church we went across the street to those same Panamanian neighbors to check out the nativity scene and to give them our Christmas greetings. It was late (around 10:45pm) but they were just getting started preparing the dinner for the midnight meal. Haley met a relative of the neighbor who is visiting from Chitre who is her same age. They arranged to get together today. Dan and the girls headed home but I stayed and chatted for awhile. I came home with a drink in each hand (I don’t drink but you can’t say no to that kind of thing, so I came home with a sangria in one hand and a ron ponche in the other) and 5 tamales with instructions on how to cook them. I got to bed around 11:45pm but it was an exercise in futility because the fireworks went off at midnight and there was no sleeping through that. It only lasted for about 15 minutes until it was quiet enough to get to sleep.

At 4:30am the power went out so that woke us up. You might wonder how the power going out is a noisy activity, but trust me, it is. For one, the fans stop and whatever noise they might have been drowning out is now audible. In last night’s case it was the music playing down the street all night and into the morning hours. But in addition, we have surge protectors for all of our electronics. When we bought them we thought we were getting the kind that would switch to battery power when electric is not available. This is true, but it’s temporary and whenever battery power is being used they all emit loud beeps. Similar to a smoke alarm chirp but louder, longer and much more frequent (read: annoying).

So at 4:30am the protectors start beeping so I stumble downstairs using my phone as my flashlight. I’m about to turn them all off but the power suddenly comes back on. Easy peasy, back to bed, right? About 30 minutes later the power goes out again and the beeping starts up again, so off I go to turn them all off (I think D was awake but was playing possum or something). I get them all off but by now Zoe is awake and is checking out the evidence that Santa had been here. She asks to open presents. Request denied.

We get back to sleep for what felt like 7 minutes but was actually about 2 hours when the girls came in and wanted us to get up for our traditional Christmas morning. So early! I don’t think they had gone back to sleep after the 5am power outage awakening. The thought of leaving our bedroom was not pleasant because the power was still out and we knew that it would soon become rather warm, and the downstairs is a much larger area and would not stay cool like our bedroom did. And the thought of no coffee was definitely not enticing me to get out of bed. The added challenge when we have a power outage is that we have no water. The water is from the city but we have an electric pump to get it into our house. No electricity, no water, no coffee, no bueno.

So we managed to get up eventually and after taking to social media we learn that the power outage is restricted to our side of the town (the abajo side – more on that in another post). So maybe that means it’s coming back soon? Who knows. But at least someone else in town has power (read: coffee) so I sent Dan to the Fuller’s hotel (on the arriba side) with a Rubbermaid container and the Spanish words for “coffee to go”. They have no drive thrus here and definitely no to-go coffee places. I don’t think I’ve seen a to-go coffee cup since I left the states.

Dan was successful and the morning looked much better after that. The power continued to stay out for quite some time, prompting Candace and I to work on a plan B for Christmas dinner, but just then it came back on. Only out for about 5 hours this time. Yay! Now that it was back on and Christmas dinner (at our house) was on schedule, it was time to get busy.

We hosted dinner at our house with the Smiths and the Higgins and our combined 7 kids (2 more Higgins babies stayed home). We have the biggest indoor gathering area for a dinner for that many people, and we have a good place for the kids to gather as well. I took Kim and Candace, Candace’s mom and Candace’s daughter across the street to admire the nativity scenes and we had a nice time hanging out with my neighbors for a bit. Kim and Candace got to try the aforementioned sangria and ron ponche. They gave some to Candace’s daughter (age 15) but the gringa adults promptly confiscated it. We left after a little while with a date to learn how to make tamales on Monday. There was much cheek-kissing when we left.

Haley hung out for most of the day with the neighbor’s 12 year old relative. Dan got Haley’s Wii set up so they had a good time doing that and the girl spoke a bit of English. She and her cousin stayed most of the day and even stayed for our traditional American dinner. There was even talk of a sleepover at one point (funny side note: the Spanish word for pajamas is pijama. The Spanish word for sleepover is pijamada. Rough translation: pajama-ed. ha!)

We had an amazing meal with many comforts from home: ham, a roast, mashed potatoes, 7 layer salad, corn casserole and fresh green beans. It was awesome! My infamous toffee even turned out great (on the second try after I switched to American butter) and a good time was had by all. This was the first Christmas for all of us away from the states so it was good to be together. Sometimes when you are around friends with familiar food in a comfortable setting, you forget the challenges that await you when you leave the house. We could have been anywhere and for those few hours, I think we all felt like we were at home in Panama. 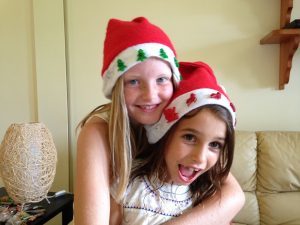 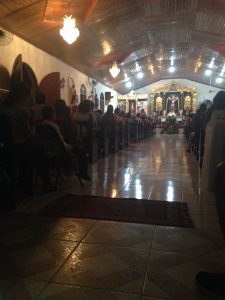 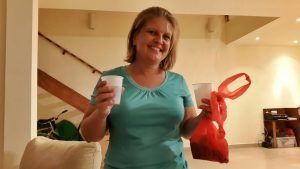