Last night we saw the annual Pedasi Christmas Parade. It feels like we have parades every week here but that’s mostly because all the towns around us have parades at different times. So we see the neighboring parade, then ours, then another town, and before you know it there’s another holiday and the parade schedule starts all over again.

Even though Christmas has passed, it was quite the party. And we hear that it’s nothing compared to Carnival, which is coming up in February. We had a big group with us – Candace had invited her former neighbors from Pocri for dinner at her house so we met up with them for the parade. When you invite people for dinner their entire family comes. There was probably 15 people with the Smiths and then we had more people along with us.

The parade was supposed to start at 7, which meant it started at 8:30. No worries. Unfortunately there was not much of a breeze last night so it was rather hot and sticky. The first female president of Panama is from Pedasi so she was here. I was shocked at the complete lack of security around her. She was hanging out on the patio (street level) of a museum on the parade route. People could go up and talk to her freely and snap selfies with her. It’s possible I saw one guy who could have been a security guard but I’m not sure. Amazing.

The parade was sweet and we had a number of friends who were in the parade. There were lots of nativity scenes, lots of candy thrown from the trucks, some gifts being passed out, some very very large trucks that didn’t seem like they’d be able to make the turns on the route, a marching band playing Christmas carols and then a whole group of kids on bikes that were lit up, some with loud music blaring from speakers that had been strapped onto the bikes.

Speaking of music, there was a lot of very loud music! The outdoor disco that is a block from our house was open for business and it was hopping! At some point there was dueling music because perhaps it wasn’t loud enough on the other side of the square. Not sure. The music lasted all night. I think I last heard it at 1 but it may have gone on much much longer. It didn’t prevent me from falling asleep but I probably am not well rested today.

Other than music there was 1) drinking and 2) fireworks. We contributed our own little firework show (Dan remembers his days in Oregon setting them off illegally so he’s very happy to get them cheap and legally here!). The fireworks continued throughout the night at random times, which did wake me up (and Phinny was not impressed).

We had everyone over to our house for dessert after the parade, which worked well. We have plenty of room, we have a/c and it’s right near the town square. Everyone seemed to enjoy themselves and it was a nice mix of gringos and locals. I’m learning to always have paper cups and plates in the house for impromptu large gatherings.

This morning the town is pretty quiet. I saw a few people making their way to church but I imagine most people are sleeping off the alcohol. From the balcony of our house I can see the disco tents are still up so perhaps the party will continue tonight. If not tonight at the very least we’ll be partying again on Wednesday. From the location of our house we’ll know of each and every party, whether we want to or not. Just another excuse for Dan to buy fireworks. 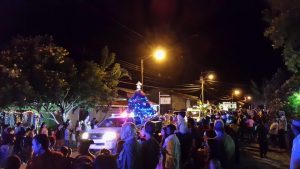 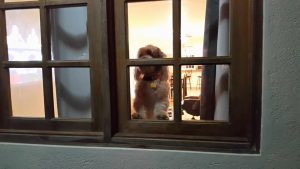