I actually stopped at a fireworks store today to see what they have and bought one just to see what I would get for $45.
Wow! I fired it off earlier in the evening and it’s basically the same kind of firework Disney uses, only not quite so high. But still high enough. It was amazing. They had some for sale that looked like you’d need several strong guys to load it into the car. The most expensive one was around $450 I think, but it probably WAS the one Disney uses. Ha!

Just another reason to love Panama.

Oh, and our neighbors across the street were very sweet tonight, inviting us over to meet their ENTIRE family with hugs and kisses from each of them. They are the SWEETEST people. They wanted us to stay for the traditional midnight meal but we couldn’t do that. Allison turns into a pumpkin at around 10:30pm. But I did take a picture of her nativity scene that she sets up on her porch every year. She’s been collecting them for 38 years. I just looked out the window (it’s now 12:13am) and they are all out at the very large dining room table they have set up outside on their porch, having a grand meal.

I guess I should get to bed. Santa comes EARLY in our house with Zoe at the helm. 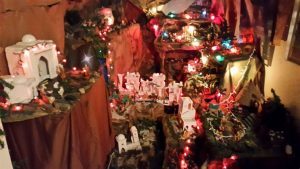