It’s Panama’s independence day today, which kicks off a month of a bunch of holidays (6 I think I heard). Today was the celebration of independence from Columbia (independence from Spain comes later). We finally got to see what all the drum practices were about. Turns out all those practices we heard were probably all different schools and groups because this was a LONG parade. It had pretty much two things in it: girls in school uniforms walking or twirling batons and boys in school uniforms playing drums. Oh, I guess there was an occasional band here and there. And a few groups in traditional indigenous clothing. But those were pretty much the only entries.

The parade started around 9:30 (pretty early if you ask me) and at that time it wasn’t raining. The longer the parade went the thicker the crowds became. It wasn’t non-stop action though. There were gaps and stops for 20-30 minutes at a time. It would have been good to bring a chair.

It started raining in earnest toward the end and we found a restaurant that had a patio where we could still see the parade while ordering lunch. After the parade there seemed to be more music coming from the park but we were ready to head back (Haley and Daniel had become overstimulated long before and were back at the apartment. Zoe and I hung out with the Smiths).

We don’t usually have rain this early or this long in Boquete and we’ve had several days of no rain at all. But today it just rained a LOT. The girls went down to the Smiths’ house to play with American Girl dolls and Minecraft (I think it was Haley playing the Minecraft but I can only assume) and D and I practiced sloth-like behavior with Hulu and Harry Potter.

The parade brought back memories of Alaska (cold marching band experiences) Spain (I was in a community band and I have faint recollections of being in a parade at one point too) and Ecuador (where I dated a Latin boy in uniform).

From Dan… I went back to the apartment because one can only sit through drum bands and traditionally dressed girls, one after another after another after another… for just so long. Allison has a higher tolerance for such things. And of course, Zoe loves a party. Any party. I was sitting at a coffee shop, and Haley found me and said, “Dad… I want to go on record as saying I’m ready to leave.” So we left.

But I’m happy that Panama has a reason to have a parade. Viva Panama!! 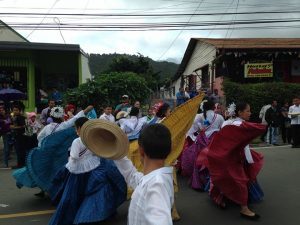 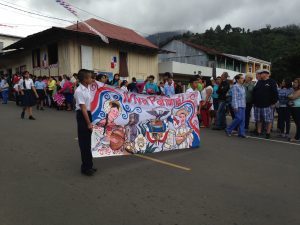 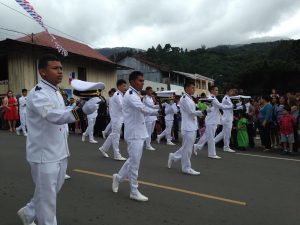