One night last week I had a bit of a meltdown (yes, again). I had made yet another very untasty dinner and my daily visits to the grocery store were stressful and overwhelming. We all know the meltdown wasn’t only about the food, but trying to feed the fam 3 squares a day does take it’s toll when you don’t even know what temperature to put the oven (darn metric system).

So Dan took to social media to find someone to teach me a few tricks. He was helped by a fellow expat in the town of David, named Kris, who knows a Panamanian women named Cedo, who was more than happy to have me (and Kris) invade her house today for 5 hours while she taught us some of the classic Panamanian dishes.

The cooking lesson was all in Spanish and Kris and I formed a mutual admiration society about how well we both know Spanish. Go Gringas! Cedo was also impressed and we chatted, shopped for the food, cooked and ate for the better part of the afternoon. Between the Spanish and all that I learned I can’t possibly recreate it here but here are a few highlights of the day:

– kitchen rocks. You mean you don’t have a kitchen rock? Everyone needs a kitchen rock! This essential tool is… a rock. Not just any rock but a rock that fits nicely into your hand. And is heavy enough to do some damage. It’s mostly used for garlic and I used Cedo’s today and am now determined to find my very own kitchen rock. Dan is very happy about the prices of kitchen rocks.

– the tree leaf. At one point when we were cooking some corn/cheese patty thing, Cedo grabs her machete and heads outside to the tree and chops off a few leaves. She washes them and uses them to cook the corn patty thingy in the pan. I said I wasn’t sure I had such a tree in my yard and she pointed to another tree and said I could use that one too. I’m pretty sure someday my fam will be eating poison oak or ingest a scorpion or something. But I’ll give it a whirl.

– the plastic bag trick. Cedo told Kris and I that she had a secret weapon when making the rice. Given my history with rice in Panama I was all ears. She grabs the plastic bag that the groceries came in (the kind that are starting to be banned in states across the USA) and she cut off the handles, puts it on top of the rice and then put a too-small pot cover on top of the bag. My brain is reeling about BPA toxins being released into my rice as I watch but Cedo swears by this technique and indeed the rice was good. Not sure I can sleep at night and use this trick every day, but I get the concept and maybe I’ll try it with a tree leaf or something.

In the end, the day was a blast and I learned a lot about cooking meat, a few new tools I need for the kitchen (a pressure cooker is key here) and some great new seasonings. It was a fabulous experience and I can’t wait to get into the kitchen and put my own spin on what Cedo taught me. And I have two new amigas in David, which is the icing on the cake. 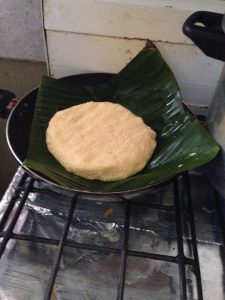 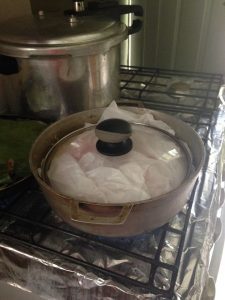 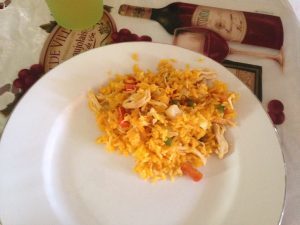 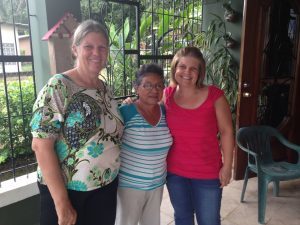