We had one of our “firsts” in Panama today. First birthday! Haley had her golden birthday – 13 on the 13th. We decided that one of the benefits of homeschooling is that you get your birthday off of school. Zoe liked this a lot because she got the day off too. We went to a new beach today called Playita (“little beach”). It’s in a protected cove area so the waves were very calm, we had some built in shade in the form of some trees and it was right next to a restaurant/resort facility so there were bathrooms and foot showers and parking nearby. You had to pay to get in ($5 for adults, $2 for kids) but it was worth it. We had a great day just hanging out and playing in the sun and the waves.

Tonight we had some of the other expat families (I’ve coined the term FamPats) over for pizza and a local expat made an amazing chocolate cake. We even had a few packages from some friends and family in the states, and our recent trip to David allowed us to get Haley a few gifts she was hoping for. Haley gives the day two thumbs up.

Stay tuned tomorrow for another birthday update, this one from Allison! 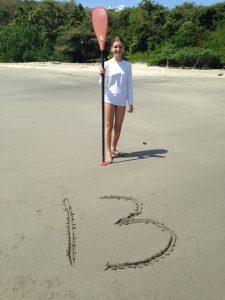