Today the girls and I and our Canadian friends went to Las Tablas to watch a parade. Daniel’s back was not up for a parade day and all the walking and standing that goes along with it. This is the third year this nearby town has hosted a “Mil Polleras” parade. Polleras are the traditional dresses Panamanian women and girls wear, along with ornate hairpieces. This parade attracts thousands (“mil”) of girls from all over the country to come and show off their polleras. They are usually accompanied by men in black pants, white shirts and Panama hats. And music. And whooping (sounds like barking, kind of).

You might think “A thousand Polleras? Can’t we just see a few hundred and call it good?” because that is what we thought before we went. But indeed it was really interesting to see all the different ones. Some were all white with colored accessories (with matching colored shoes). Others were really colorful. Others were white on top with colored skirts. We couldn’t always tell where they were from but from my vast experience (read: watching a dance at the Mothers’ Day Fiesta at school) I was able to recognize the ones that were likely from Colon, or at the very least the Caribbean side of the country. I also recognized the flag from Chiriqui, which is the province Boquete is in, where we lived for a month in October. It’s kind of neat to recognize different parts of the country.

Equally interesting was the parade crowd culture. The flyer said the parade started at 1pm. We saw the first group come by around 2:45pm, followed by a 20 minute gap until the next group passed. There were usually gaps between groups, usually 5-10 minutes but sometimes longer. In addition, we had found a nice place on the shady side of the street from which to watch the parade. We camped out in front of someone’s house in our beach chairs and made a nice little home for ourselves. As the parade start time got closer we had a lot of people standing in front of us. We thought it was just for the shaved ice guy but they stuck around long after he left. Then we had an older lady simply set down her folding chair right in front of us! So our chairs really ended up being the place to camp in between the floats and the polleras. So the chairs served a purpose, just not entirely the one we thought.

The other thing that was different was that people didn’t seem to have different chairs for parades as for their houses. We saw a lot of people carrying plastic patio chairs, metal folding chairs, stools and whatever chair they could find as they were leaving the house. Portable fold up chairs? That is so gringo! Well, yeah, that’s what we had. Tommy Bahama chairs complete with a built in cooler pocket for ice and drinks on the back of the chair, with built in backpack strap. Thank you PriceSmart.

There were parts of the parade that were quite organized. This is the first event where I have seen port-a-potties. There was a news van, there was a place that had stadium seating. There were streets blocked off and there was a definite police presence (although there were police in the parade too so hopefully nothing big went down during the parade!). And there was food. Lots and lots of really yummy looking and smelling food. Chicken, ham, hot dogs, french fries, fried chicken, chicken and rice and of course a zillion cold sweets. We were told by our local Panamanian friend (Haley and Al and Shelly’s Spanish teacher) that you don’t want to eat this kind of food on day 2-4 of Carnival, that it’s not good. But because this is a 1-day celebration, it’s fine. Good to know! I had ham and indeed it was tasty. The girls had hot dogs cut up on a stick.

The party continued after we left. I think there was a folkloric something-or-other tonight, and of course fireworks are scheduled for later. We hear there’s another parade tomorrow of the men in masks. Not sure we’ll make it back for that one this year but maybe next year. Zoe is already asking for us to buy her a pollera. They definitely are pretty and I’d love to have a traditional shirt that many of the women spectators were wearing. I wonder if they make the men’s version in orange for Daniel? 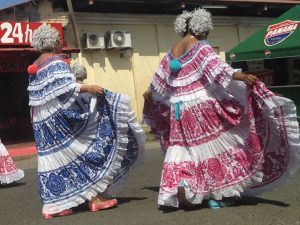 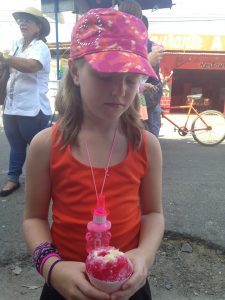 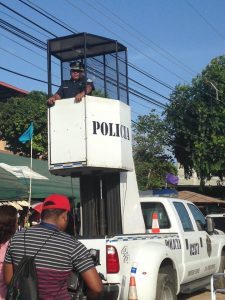 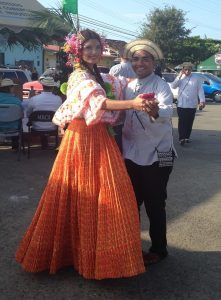 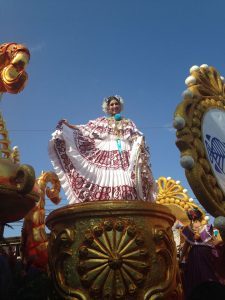 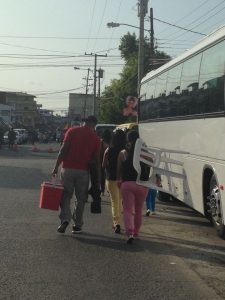