Since we were in the neighborhood on our visa run out of Thailand, we decided to stop in and see what all the fuss was about in Cambodia, specifically Angkor Wat. This was a very quick trip – we arrived on a Saturday and left on a Tuesday – so we really only had two days for activities.

On our first full day we arranged for a driver from our hotel to take us hopping through all the structures of Angkor. Angkor is actually the name of the historical city in which all these many structures were discovered, including the “wat” which means “temple”. Here’s the synopsis of our day in case you want to skip all the education and go right to the pictures: we started off somewhere and saw some old rocks stacked in the shape of buildings that had images all over them and noticed it was pretty warm out. (When we say “stacked rocks” we don’t mean the zen kind of thing. We mean large blocks of stone stacked neatly to form buildings…etc. But it sounds funnier to just say “stacked rocks”.) Then we went somewhere else and saw more, with sweating happening at a brisk pace now. Then we saw even more stacked rocks at another place and by this time we were full-on drenched in our own sweat, and disgusted by the smell emanating from our beings. Then we had lunch in a wonderfully air-conditioned restaurant and regained some strength, which was needed for the Big Daddy Of Old Stacked Rocks: Angkor Wat. After rushing through Angkor Wat because we were sure we were going to die if we didn’t get out of the sun, we begged to go back to our hotel and we collapsed in the A/C and everyone took a nap and a shower. That was pretty much it. If you’re short on time you can scroll down to the pics now.

I must say, however, that despite the heat, it was very neat.

For The Die Hard LJT Fans

I know there are some of you who hang on my every word and consider this your homeschool class that you never enrolled in. So for you folks, here is some additional information:

Angkor Wat (Khmer: for “Capital Temple”) is a temple complex in Cambodia and the largest religious monument in the world, on a site measuring 162.6 hectares. It was originally constructed as a Hindu temple of god Vishnu for the Khmer Empire, gradually transforming into a Buddhist temple towards the end of the 12th century. It was built by the Khmer King Suryavarman II in the early 12th century in Yaśodharapura (Khmer: present-day Angkor), the capital of the Khmer Empire, as his state temple and eventual mausoleum. Breaking from the Shaiva tradition of previous kings, Angkor Wat was instead dedicated to Vishnu. As the best-preserved temple at the site, it is the only one to have remained a significant religious center since its foundation. The temple is at the top of the high classical style of Khmer architecture. It has become a symbol of Cambodia, appearing on its national flag, and it is the country’s prime attraction for visitors.

Angkor Thom and the South Gate

Our first view of the ancient stacked rocks was a gate with a pretty cool bridge. Our driver said we could hop out, walk across the bridge and he’d pick us up on the other side of the gate, about 50 feet down the road. Dan is loving this tour so far.

The internet tells us more about what we saw:  On one side of the causeway, fifty-four guardian deities (called “devas”) pull the head of a mythical serpent or “naga.” On the other side, fifty-four images of demon gods (called “asuras”) push the tail of the serpent. The whipping motion of the serpent’s body was said to churn the ocean and recreate the cosmos anew.

So if you can imagine that level of detail about statues lining a bridge, can you imagine all the other details about what we were seeing? It’s overwhelming. This is where the “layering, slowly” method of education is necessary!

Our driver then took us to one structure and told us not to hire a tour guide at the entrance. He said, “they will take your money and tell you fake stories”. OK, we took his advice. He suggested we tour the structures with a book, which would give us the right information. We didn’t have a book so we decided to just wing it and look around. We did that and took a number of silly photos. We were reminded so much of Chichen Itza, which we saw while living in Mexico. It had a very similar sense of ancient, somewhat primitive societies but still very advanced. The pictures on the rocks in Angkor were more advanced from what we could see. This makes sense since Angkor was built about 500 years after Chichen Itza.

Then we went to another place and this one was my favorite. This is where parts of the movie Laura Croft Tomb Raider was filmed. Seeing the trees growing all around the buildings and temples was so interesting! I loved this one. Our driver said we’d love Angkor Wat even more, but honestly, this was our favorite. It’s smaller than Wat, but way more interesting.

Did I mention we were dying from the heat? We stopped for a cold drink and hunted down some bathrooms, which was not easy. Cambodia rivals Amsterdam in their limited bathrooms. I think they assume that people will simply sweat everything out and no one needs a bathroom. We were glad we did not eat any of the tempting street food the night before! Our driver knew where the decent ones were. I was feeling bad for anyone who didn’t have our driver.

After the tomb raider area, we went to another area. Frankly, they are all blending together at this point. I vowed next time to do a better job of planning ahead by doing more research, getting a book and maybe even hunting down a guide who would not tell us stories. But sometimes you just can’t overkill it on the education. Our brains get full of new things (we had just finished an epic tour with Moses in Penang a few days earlier) and we just have to wander around and take it all in slowly. So that is what we did. There’s always an online refresher to fill in the blanks later.

Then it was time for lunch and our driver took us to a nice restaurant with A/C and we all got a new dose of energy that we needed in order to see more old stacked rocks.

After lunch, we went to the actual Angkor Wat. This place was HUGE! It was a long walk across a plastic floating bridge across the expansive moat around the temple area, that seemed to radiate heat off itself and up into your body. It was already 1 p.m., we had no shade, we had to cover knees and shoulders (Dan was actually wearing PANTS) and it’s HUMID. So yeah, we were dying. But this was Angkor Wat! We had to push through! We wandered around in a semi-orderly clockwise fashion. We saw really cool reliefs on the walls, lots of towers and rocks with images, some statues, more towers, neat architecture and even more stacked rocks. There was one tower that had a lot of people entering but you could not go up if you were under the age of 12. Dan has never been happier to have an 11-year-old in the family: “We can’t leave her behind, that would just NOT be fair”. Haley and I took one look at all the stairs to enter this tower and declared ourselves OK sans tower.

We wandered around some more and eventually we all admitted that we were done. As in, put a fork in us, done. So we scooted out of there. Our driver seemed to have a 6th sense of when we were ready to be done because he was waiting for us with the van running. We found another bathroom (honestly it was like 1/2 a mile from the middle of Angkor Wat – you really have to plan ahead on this!!!) and then we begged the driver to take us home. He was available to us until 5 pm and said he could take us to a few more places inside Angkor but we all said “thanks but no thanks”. Having picked us up at 8 a.m., this was just too much for the Shermanos.

We did make one additional stop at a memorial for the many people who died under the Khmer Rouge regime. Although most of the killing fields are near the capital city of Phnom Penh, there was a memorial near Siem Reap that told a few stories of victims and survivors, as well as explained the citizen’s attempts to remember – and learn from – the horrendous travesties from that period in Cambodia’s history.

All kidding (and sweating) aside, we really enjoyed seeing Angkor Wat and the other structures. We made a lot of connections to other historical people that we have learned about (Mayans, Romans, etc) and it was amazing to see the structures that were built without modern machines. There was so much we didn’t know, however, that it really only whet our appetite to learn more about this area of the world. We will have to come back someday. Until then, we can now clearly recognize the Cambodian flag, with Angkor Wat featured prominently. 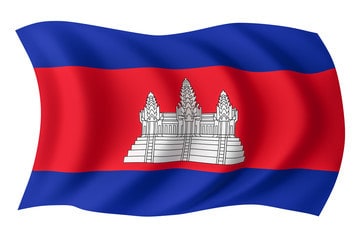