Yes, it’s been very meaningful to learn about Apartheid in the country where it happened. But little did we know we’d be here at the time of the most significant political event since Apartheid, and we are watching it unfold live and in person. As always, I will attempt to explain it to you, loyal followers, so that you too can have a taste of the experience. #itswhatIdo

Learning about something that happened much more recently holds a stronger interest for the girls. In Spain it was a little hard to wrap our brains around kings and princes and Nazrid cultures. In Mexico we got a great big dose of the Mayans. But none of those populations existed within our lifetime and none of those guys can be seen on video with Oprah, Will Smith or Michael Jackson. So when we started to learn more about Apartheid and Nelson Mandela and Mandela’s life here in South Africa, it was very interesting for the girls to see him overlap with other famous people that they know. When someone shows up with Michael Jackson, Zoe pays attention.

We have also learned the value of well-done documentaries and historically accurate movies. When we have tried to watch YouTube videos on various concepts, we find that if they are poorly done (think 8th grade research project) it is so distracting from the message that we often give up. So we focus our educational viewing on documentaries that are professionally produced. When learning about Mandela we were pleased to watch the movie made from his autobiography. It was something we could watch as a family and we all enjoyed it immensely, and learned so much.

A few weeks later when we were visiting the Apartheid museum, it was another layer of the education that helped it all sink in. The girls especially enjoyed the video reel of Mandela’s life. They saw how the movie depicted with incredible accuracy some of the significant events of the era. Here are a few pictures from our time at the Apartheid Museum.

Apartheid has been abolished for 23 years but many estimate it will take another several generations for the economic disparity to equalize. You see evidence of it just about everywhere. Despite blacks being 80% of the population, you see mostly whites being served in restaurants or at malls, and mostly black servers. The shantytowns and impoverished communities are made up entirely of black people. A beggar in the intersection who is white is rare, and a pizza delivery guy who is white is equally rare. The years of below standard or non-existent education, lack of access to home and property ownership and suppression of opportunity over a period of hundreds of years takes it’s toll. You cannot pass a law that all races are equal and suddenly transform a society. From an outsider’s perspective I think we thought “Oh, good, they abolished apartheid. All will be well now.” and many people outside South Africa point to the successful hosting of the World Cup in 2010 as an example that all is well in South Africa. But after living here we see that all is not well. The people are amazing, there are many many hard working people of all races who have the best interest of the country deep in their hearts. But South Africa has a very long way to go before the effects of Apartheid – and British and Dutch colonization before that – are no longer visible.

Since we have been in South Africa we have seen some live, breaking news unfolding before our eyes. Many people are referring to these events as “the most significant political event in South Africa since Apartheid”. Indeed, even with our limited involvement in government here, we can tell there is something big going on. One morning I woke up and just from the few South African Facebook groups I follow (usually just homeschool groups and community groups for the town where we are living) I knew something had happened. I wrote to a good friend in Johannesburg who is my source for all of my nagging questions and I asked her “What just happened?”. Her summary helped make some sense of it so I’ll attempt to explain it to all all y’all too.

There are 2 Indian brothers known as the Gupta family who are very wealthy and well connected within the South African government. Last year major transactions involving corruption with Eskom (the parastatal that supplies power) were uncovered and a link with this family was rumored. Zuma’s nephew and one of his sons are in business with the Guptas and there are proven links from cell phone records and recorded meetings. The Guptas have been seen on many occasions with various political ministers.

In late 2016 President Zuma suddenly replaced his respected finance minister, Mr. Gordhan, with a suspicious man that was previously involved in corruption and who had no experience in finance, Dave van Rooyen. Markets came crashing down and South Africa lost billions of Rand (their currency) in minutes. Three days later Zuma was forced to replace van Rooyen with a different finance minister. Later, bowing to pressure, Zuma reinstated Gordhan as minister of finance.

Most people believe that Gordhan was standing in the way of Zuma and Guptas profiting from multi billion Rand deals linked to a nuclear plant among other things. Gordhan would not give go ahead on a few such ventures and also submitted a report about shady business deals in the Guptas’ bank accounts. This in turn caused all the South African banks to close the Gupta brothers’ accounts and refuse to do business with them. Zuma tried forcing Gordhan to intervene with the banks on behalf of the Guptas via a court order, and failed. Of course this is now the power struggle and it would seem like the Guptas are controlling Zuma’s every move.

If you google Guptagate you will find tons of factual information. In a nutshell, many believe the SA government is being run by the Guptas. The DA (the opposing political party from Zuma’s political party, the ANC) submitted a request for a vote of no confidence in the president to parliament early this year and it only lost by a few votes. So all this culminated a few weeks ago when Zuma notified the executive committee that he was going to replace Finance Minister Gordhan and his deputy and he was warned not to do so. Evidently Zuma did not take them seriously. Last Thursday at midnight he went ahead and made 12 changes to his cabinet, including firing Gordhan and his deputy, placing a corrupted insider as head of treasury. SA evidently has one of the strongest pension funds in the world so there is a lot of money to steal and according to many, the Guptas know this. Earlier this week, an ANC stalwart that was close to Mandela, Ahmed Kathrada, died and left a blistering letter of rebuke to Zuma asking him to do the right thing and step down. Zuma was not allowed to attend the funeral and Gordhan was heralded with a standing ovation for his integrity and unwavering stance. Also Mr Mohlante, who was President for a year or so after the second post-Apartheid President, Mr. Mbeki was ousted for corruption, gave a hair-raising speech, quoting Kathrada’s letter at the funeral. There is also rumor that some insiders close to Zuma knew of the planned cabinet reshuffle as there have been suspicious trading volumes on the stock exchange in the days leading up to the shuffle.

Warning: NSFW strong language coming up. Scroll down for more….

After the middle of the night cabinet reshuffle and suspicious trading on the stock exchange, S&P downgraded South Africa’s financial status to “junk” which has seemed to really open the eyes of many people in the country.

Indeed, within a few days of becoming finance minister, the new guy signed the nuclear deal that the previous minister said he would never sign. And since that time the SA Rand has tanked against the US dollar. All of this has resulted in a call for April 7th, 2017 to be a day of protest. That is the day we visited the Christian Barnard Open Heart Surgery Museum. We saw people holding signs over the freeways and people along the sides of streets with signs and banners. But we weren’t affected in any way. Reports on social media indicate that the protests all over the country were peaceful, respectful, races were united and momentum was built. I think many South Africans were extremely proud of their country that day, and were happy to send a different image of protesting in South Africa out to the world.

Multiple friends and family  have reported to me that the South Africa political situation is making the international news. If you want to read more from a South African source, this is one of my favorite websites. Some of the videos he has on this site from the protests give me goosebumps, and yet they are so familiar. The people, the streets, the attitudes, it’s 100% accurate from our perspective of living here.

Unfortunately, there’s not an end to this story. The politics continue and yet our time here is almost up. We will be watching from afar with great interest, however, and hope and pray that the South African people get the leadership that they sorely need and deserve. We will always wish you the very best, South Africa. Amandla, indeed. 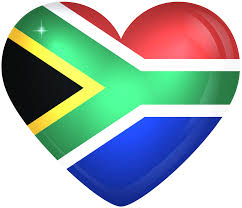