Deprecated: Return type of Requests_Utility_CaseInsensitiveDictionary::getIterator() should either be compatible with IteratorAggregate::getIterator(): Traversable, or the #[\ReturnTypeWillChange] attribute should be used to temporarily suppress the notice in /home/letsjust/public_html/wp-includes/Requests/Utility/CaseInsensitiveDictionary.php on line 91
 Bacalar, Mexico – Let's Just Travel
Home  >  Cenote • Mexico  >  Bacalar, Mexico

We are in a bit of no-man’s-land at the moment. We no longer have our house in Cancun but we still have our car. But it’s not quite time to leave for Spain so that makes us… homeless? Car-full? I dunno, but it seems like a good time to do a road trip.  We decided to check out Bacalar a few days ago. It involves water and pretty colors and cenotes. We are in!

Bacalar was a city of the Maya civilization in Pre-Columbian times. This was the first city in the region which the Spanish conquistadores succeeded in taking and holding in 1543. After the town was sacked by pirates in the 17th century, the Fortress de San Felipe Bacalar was completed in 1729, and is still there today, front and center in the main square.

Bacalar is a 55 kilometer long fresh water lake that parallels the ocean in the southern part of the Yucatan Peninsula.It’s about 1.2 miles at it’s widest point. It takes about 3 hours to get there from Playa del Carmen. Other than a few towns, the only scenery you’ll see is a bunch of mangrove trees. No bother, we’ve got Spotify and Dan fired up the 80’s playlist (insert eye roll and groaning from the back seat here). 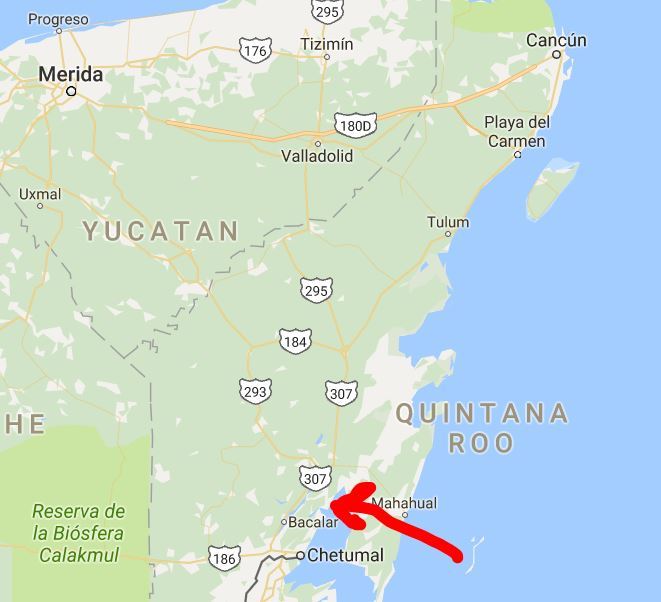 Bacalar itself is not all that impressive of a town, but the lagoon… well, prepared to be impressed. People call it the “lake of 7 colors”. There are 7 cenotes that the lagoon sits on top of and each one contributes a different color to the water.

Wait, what? Cenotes under a lake? Make up your mind, people is it a lake or is it a cenote?

Well, it’s both, as we learned on our boat tour. It’s definitely a lagoon but if you go to certain places you can see a very distinct change of water color. Take a look under the water and you literally see a drop-off into a very deep, dark hole. Our boat tour took us to one cenote and we parked for awhile so we could swim. On one side of the boat the water was 1 meter deep. On the other side it was 45 meters deep. What the what!? It was crazy cool to look at with your snorkel mask, but really freaky too. It made you feel like some large monster was suddenly going to emerge and suck you under. That didn’t happen to us. Es bueno. Continuing our tour of the lagoon we went to a place called Pirate’s Canal. This was a pretty self-explanatory name. Evidently during the time shortly after the Spanish conquest, pirates would come to loot the wood and other valuables of the land. They had to enter from the Caribbean Sea into the canal to get on land and this was the best spot for them to do it. Well, those Spaniards are no dummies. They built a fort on land directly in front of this canal, and they also created a few traps using wooden posts that are just below the surface of the water. These posts would trap the pirate boat and kept it from leaving and provided a very easy target for those sneaky Spaniards.

You can still visit the Spanish fort, as it’s right on the main square of Bacalar. We noticed the moat and lamented that it was no longer filled with water. But given the very low wall around it from the sidewalk, we are pretty sure it claims at least a few stumbling drunks periodically. Yeah, no liability lawyers here. We also lamented the fact that the museum was closed on Mondays, the day we were there. Well, one person lamented that fact.

In addition to the boat tour we went to a lake-version of a beach club. You pay to get in, you can play on the slides, the docks and be served lunch at your palapa. It was a great day for playing in the water and we learned we are still not immune to sunburns.

The weather was great, the lake was beautiful and the 80’s tunes kept playing all the way back to Playa del Carmen. Road trips don’t get much better than this. Well, the kids have a few suggestions for a change of tunes but what do they know? They’re just kids.