This is Zoe here, reporting live from Mom’s computer! I recently did a mini concert and I wanted to share it with you guys. I became inspired to play the ukulele when I saw a video about the chords of a ukulele. They looked very “easy” and I started to look for more videos like that.  At first I wanted to get a guitar, but then I decided to get, as I used to call it, a “mini guitar”. The ukulele was smaller so it was better for travel. A few weeks later I asked my parents to check it out. We went to a music store but they didn’t have it in stock. They soon found an available uke and ordered it. We went and got my AWESOME ukulele the next day. My grandma was with us and she paid for it because it was my early birthday present. I really like the color. It is coffee brown.

We found a really nice teacher to teach me the ukulele. He is just the nicest teacher EVER. I don’t think we are going to find a different teacher like him. My lessons are in Spanish, and he talks slower to me than he usually does. I tried to learn it by myself but, that did not work out. I have never played a musical instrument like this one. I didn’t know what the strings were and I got confused, so I was like “NAH, Mate”.

He has this house that he converted into a musical studio. He has a piano room, a drum room, a guitar room and the main room, which I do my lessons in, which is ukulele, piano, drums and guitar. He has a TV in the living room where you can watch your son or daughter in the lessons because he actually has security cameras in the room. The room has soundproofing on the walls.

Me, mom, and dad were watching music videos and I saw the song Hello by Adele and I sang the “Hello” part. My dad heard me and he said that I should take singing lessons. We found a singing teacher for me. She is Canadian and she is very nice and very funny. She comes to my house instead of me going to her house and we have lessons in my room.

When I first started out with the ukulele me and my ukulele teacher started with “Somewhere Over The Rainbow”. I was pausing in between the finger changes. Now I can do it without pausing. I’ve been working on a Spanish song called Espacio Sideral about outer space. Now I’m working on Let it Go in Spanish, which is called Libre Soy. I’m also working on Rude (in English). I can play Ode to Joy. Let It Go is very difficult. Rude is coming along OK but still kinda hard. And Espacio Sideral is super easy but I just need a little guidance. And, of course, Somewhere Over The Rainbow is SUPER easy. I get to sing and play ukulele which is kind of hard. If I couldn’t really sing and I still played the ukulele I would think “what’s the point?”. The two things go together very well.

The first time my ukulele teacher asked me to be in the concert I said no way. Then he gave me his ukulele to practice with during the lesson and he put me on a microphone. I sounded much better so I decided to do the concert.

The concert was a few days ago. It was at a cenote and they had chairs and a microphone and a stage set up. I really liked it and I got a certificate. We were the only foreigners there. The maestro told me later that several people asked who the gringa was! He also told me that when I was playing he saw a Hawaiian dancer and her mouth went open in disbelief.

Here is the video of my recital. Click on the below image. 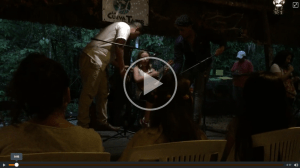