Deprecated: Return type of Requests_Utility_CaseInsensitiveDictionary::getIterator() should either be compatible with IteratorAggregate::getIterator(): Traversable, or the #[\ReturnTypeWillChange] attribute should be used to temporarily suppress the notice in /home/letsjust/public_html/wp-includes/Requests/Utility/CaseInsensitiveDictionary.php on line 91
 What’s Next??? – Let's Just Travel
Home  >  What's Next  >  What’s Next???

We love to get questions from our readers. One that is coming up a lot more lately is “Where are you going next?”. It’s the ying and yang of world travel: we love it here in Mexico but there are so many places we want to see. So we will venture forth, knowing we can always come back.

As you know, we set off on this adventure in October of 2014 with one plan, and it quickly morphed into something altogether different. And even the plan when we arrived in Mexico quickly changed, and keeps changing. So we have no doubts that our current plan will also be altered once we learn something new. But for now here it is. Stay tuned to see how it all plays out…

In mid-August we will depart Cancun after our last scheduled visitors have left. We will travel around Mexico and a few key spots in Central America. We have a few things we want to see in Guatemala, Belize, and Honduras. So we hope to pop into those countries for a quick visit. In early or mid-October we’ll catch a flight to Europe. We are fairly confident we will be back to Cancun at some point. We are not selling our car and will leave it here to be available for when we return.

We’ll probably fly into Spain and stay put for a little while, but take some trips to explore the site of my first international living experience in Alicante, see some great friends in Portugal and meet up with other Worldschoolers who have congregated in that area. We aren’t sure where we will settle in Spain but we hope to find somewhat warm weather and some like-minded families.

We have promised the girls a white Christmas and we are looking into the French Alps or Andorra. We want guaranteed snow but after a week it will probably guarantee to motivate us towards warmth again. (Dan, in particular, hates the cold.)

That takes us to January, when we will leave Europe as required by the Schengen Agreement. According to the treaty, we can only spend 3 months in the Schengen countries (which includes much of Western Europe) and then we have to leave that area for 3 months before returning to it. 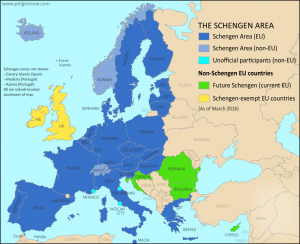 So off we go, out of Europe for 3 months. We’ve decided to pass the time in South Africa. After we made the decision to go to South Africa, we discovered there will be a Worldschooling conference in Johannesburg in February. It’s funny how these things kind of fall into place. It’s what happened with our decision to come to Cancun, too. As if that wasn’t serendipitous enough, we’ve discovered that some of our Mexico Worldschooling friends will be attending the South Africa conference, too.

After the sun and adventure of South Africa (it’ll be their summer then), we will continue our European travels, starting with Holland in mid-April, in time for the bloom of the tulips. From there we’ll use our allotted 3 months to explore more of Europe as the weather is more favorable. When our time is up and we have to leave again it will be mid July. We will not plan any further ahead than that. We’re already expecting that the current plans won’t stay the same. They never do. But sometimes you have to back into your plans, especially when you have specific months and places you want to be (e.g. a white Christmas, tulip bloom and Worldschool conference) and when you have to be compliant with visas that are inflexible (who is this Schengen dude anyway!?).

So if you ask us where we will be a year from now, we’ll say “Europe” but if you had asked us a year ago where we would be, we probably would not have said “Mexico”. You just don’t know what you don’t know. But you’ll know when we know and we’ll all enjoy the adventure as it unfolds.

For the long-term-planners out there (I love you people), our long term plan is to visit (and live) in a whole bunch of places including Europe, Africa, Asia, South America, Antarctica and do an RV trip across the USA. Our current plan is travel until at least 2020, when Haley is 18 and Zoe will be entering high school. At that point we might decide to settle down and stay put in order to give Zoe the traditional high school experience. If she decides she wants that, we’ll go back to Arizona. But if she’s interested in more travel and the rest of us agree, then who knows where we’ll be off to… 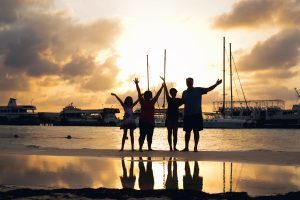