In case you were admiring those cute dresses worn by the little girls in my last post, you’ll be happy to know they got another chance to wear them! On Saturday around 5 p.m. the disco down the street started thumping. We heard there was something going on so around 8 p.m. Zoe and I went to check it out. The pink horse and castle structures from the stage the night before had been turned into a float and was making it’s way around the square with all the adorable little girls on it. When we got there it had completed one loop around the square and was starting on the second. We caught up to it and watched it for awhile. While we were there it looped again 2 more times. I’m not sure how many loops it made before they called it a night but I can imagine those little girls were tired of standing and waving.

The disco was an interesting choice for that night. The next morning Pedasi was hosting a triathlon. In fact, in the square while watching the parade they were already setting up for the end of the triathlon and the bike-to-run transition point. It was easy to pick out which people were in town for the triathlon and who was a local just watching the parade. I guess the people holding beers were a dead give-away.

I was assuming that they would shut down the disco earlier than the usual 4 a.m. After all, it’s very loud, and there are hotels right on the square, surely filled with athletes for the event the next day. They wouldn’t possibly want to interrupt their sleep, right?

The disco went strong until 4 a.m. Probably about the time the athletes were getting up and getting breakfast. I heard of at least one hotel owner who had to relocate all his guests because of the noise. No es bueno. When I walked to the square at 6:30 a.m. they were still picking up beer cans, probably just in time for the athletes to come running through!

I am involved in an Animal Advocacy group in town, organized by expats. We had arranged to sell pancakes as a fundraiser so I was up early helping out with that. We thought the spectators might like some breakfast while they waited.

I guess Panamanians do not like to stray from their traditional breakfast.

But we enjoyed watching the runners go by while we were not selling pancakes. Although we heard that the day before when the athletes were taking a practice swim there were jellyfish tentacles in the water. Those are very bothersome things that create nasty red marks that are very irritating on your skin. Not exactly what you want for your first part of a 3-part event.

But all is well that ended well. The expats enjoyed some nice social time since no one was too busy making pancakes. The athletes seem to enjoy their event and hopefully everyone got caught up on their sleep. Es bueno. 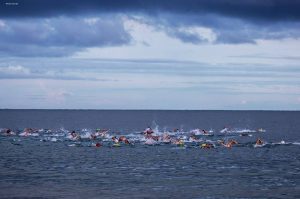