We had a typical Panama Moment this weekend. Dan and I were on our way back from Costa Rica, after doing our last border run (good riddance on that chaotic process!). We stopped at a major grocery store for a few items that are hard to find in Pedasi. We found the kids’ favorite granola bars and put the box in our shopping cart. The box was cut open so you could buy the bars individually, but we wanted the whole box (and it was the last box on the shelf).

At checkout the teller had to take out all the bars and count them. There were 8. So she tried to ring one up individually and multiply it by 8 but the individual bar was not in the system. OK! So she rang up the box, which came up in the system. OK! But then she pointed out that the box was supposed to contain only 6 bars but there were 8 shoved in it, so she had to take out 2 bars. I asked if we could buy the other 2 bars as well.

Alrighty then! We bought the box of 6 bars and the teller put the other two bars on the side of her cash register. I told her she was going to have a hard time getting rid of those and she agreed! ha! Funny thing is that almost ALL the granola bar boxes were opened like this, so my experience will not be unique among granola-bar eaters.

So if you like granola bars, you might go to Rey in David in a few months. I bet they’ll be having a display of all kinds of single bars. You won’t be able to buy them, though, cause they aren’t in the system. 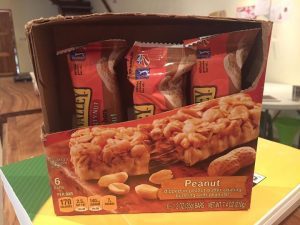