When I started homeschooling I knew that I could tackle the math assignments well enough, and making sure the girls got in some good reading and language arts time also didn’t seem too daunting. But I was really not sure how I was going to tackle social studies – specifically history. With the help of my teacher friend I mapped out a period of about 6 weeks when Haley and Zoe would work on the Revolutionary War. At first I really wasn’t sure how I would do it. I knew I wouldn’t stand up in the living room lecturing for hours while the girls took copious notes. I finally had an “aha” moment when I decided to take advantage of Daniel’s love of documentaries.

We found multiple documentaries and several evenings were spent skipping our favorite shows and delving into history instead. Since we were all watching it we were able to incorporate it into our conversations. I was surprised at how many times “Redcoats” floated into everyday life.

After the documentaries the girls had to test Daniel and I with “3 truths and a lie” using random facts about the Revolutionary War. They are good researchers (or we are bad students of history) because they stumped us both on the first try.

This week it was time for our final projects. I took advantage of my teacher friend coming to dinner and we made her and her husband’s presence a good excuse for the final presentations. We were really in the history mood during our final throes of preparation this afternoon when we decided to act out the Boston Tea Party in the kitchen as well as act out the major players in the war. Phinny helped us by being Spain. Spain played a part at the end, we had learned. Who knew??

This evening, Zoe presented her timeline of Revolutionary War events (pictured below) and Haley read her essay she wrote from a Boston Patriot perspective (copied below). Both were received tonight with great reviews and accolades. We will take a short break but I’m already excited about teaching the World Wars. We might need to recruit a few more kids when we act those out in the kitchen.

Greetings from Boston! How is it going down in Georgia? I hope the silk production is going well. I’m still very sad that you had to go to Georgia, but I understand your decision. If my husband wanted to moved down there, I would too. Everyone is super tense here. Have you heard what happened at the docks last December? Well, all of the dock workers refused to unload the new shipment of tea. I don’t blame them. The taxes that the Parliament is giving us are absolutely ridiculous, and they won’t even let us send a representative!

Everyone here is totally against the British, and for good reason too. One of the main reasons I’m against the British is because of these taxes. Why do we even pay them? I think that all of the old men in that fancy government building across the ocean are greedy pigs. I don’t see the need to pay these stupid taxes if we can just get rid of them and claim our righteous freedom at the same time. The only reason why these grumpy men are taxing us is because they think we caused their war debt, but it’s not our fault!

The Parliament says that they fought the French-Indian war because they wanted to protect us, and now they are taxing us, saying that we are the cause of their debt, but they just want money from us! Can you believe it? They’re blaming us, and they aren’t going to get away with it. They are trying to control us once again. Remember the main reason why we left? We wanted religious freedom. Now they are going to come in and take away our rights.

I know you may be concerned about whether or not the British will still buy from you if we become independent. Just because they lose doesn’t mean we will have a bad relationship from then on. Don’t worry. I promise you that the king will still want your silk for his fine robes. Ha!

I know that the British are going to get angry. When they want to start a war, I’m definitely going to be on the patriot’s side. I hope you do too. If we stick together, we can win our freedom back. 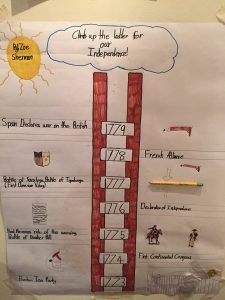