Panamanians are very honest and genuine people. They tell it like it is and make no apologies for it. But they also have no ulterior motives so you really can’t fault them for speaking the truth. I had two examples of this in the last few days….

On Monday I was walking home from the chino (grocery store) and ran into a neighbor who has kids at the school. I met her last year during a school meeting. I decided to get her opinion of the deplorable conditions of the bathroom, and told her of our idea to fundraise among expats for some improvements. She thought this was a good idea and proceeded to tell me of the generosity that she has always encountered from expats who live and work in Pedasi. She went on to tell me about her husband out of work, her child needing an operation and how they had no money or food for dinner the night before. At this point I’m very uncomfortable and feel like opening up my wallet and just throwing cash at her. But that’s not what she was looking for. She was simply making conversation and one topic led to the next (as is her pattern, which I have learned from previous – long – conversations with her).

In the course of the conversation I learned that her husband was the one hired by our property manager to come and trim the weeds in our front driveway the following day so I felt good that he had a little bit of work. And I vowed to request more frequent weed trimming in hopes to give him more work. The neighbor and I bid our farewells and I resisted the urge to give her money. I still feel like walking by her house (she lives around the corner from us, only 4 or 5 houses away) and accidentally dropping a bunch of change, but I have to trust in the system. Sidenote: they DO have social programs here where the government shows up and hands out bags of rice, gallons of oil and onions and garlic out of the back of a large truck, to the people in need. So I know there are provisions for people in her situation. Nonetheless, her Panamanian honesty made my American conscience uncomfortable. Even though it was genuine in her attempt to simply make conversation and share her experiences.

More honesty came yesterday when I took Haley to get a haircut at the only salon (room in the back of someone’s house) in town. This was the third time I’ve taken Haley there and the lady remembers us. At one point during the cut she looked at my hair and said “You got a new style since last time you came”. Yes, indeed I recently had a cut from a fellow expat hairstylist and changed the style a bit to better accommodate the humidity here (read: to look OK when I come in from a Phinny walk looking like I’ve been in the shower). Well, the Panamanian hairstylist proceeded to tell me that she didn’t like it, that it didn’t look as good as last time and was not as flattering on me. OK! Uh, THANKS?! I wasn’t sure what to make of that at all. But I could tell that she was not fishing for my business, she was simply giving me her opinion.

A big part of living in another country is tolerating being uncomfortable a lot more of the time. I’m not immune to feeling uncomfortable but I am getting used to it, including when people speak honestly.

You can judge my hair for yourself. The first picture is after I got a cut in January and the second one is a new style I acquired recently. You can give me your honest opinion. I’m used to it! 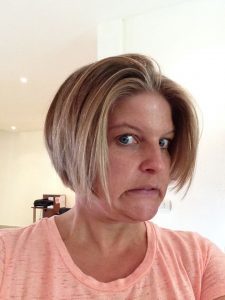 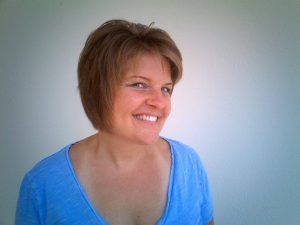