Deprecated: Return type of Requests_Utility_CaseInsensitiveDictionary::getIterator() should either be compatible with IteratorAggregate::getIterator(): Traversable, or the #[\ReturnTypeWillChange] attribute should be used to temporarily suppress the notice in /home/letsjust/public_html/wp-includes/Requests/Utility/CaseInsensitiveDictionary.php on line 91
 Spay and Neuter Clinic – Let's Just Travel
Home  >  Haley's Corner • Panama • Pedasi • The Zoe Report  >  Spay and Neuter Clinic

Today Pedasi was the site of an animal spay and neuter clinic, sponsored by an animal advocates group that I’m involved in. We skipped school and the girls helped out. Here is how they describe their day:

From Zoe:
Today I skipped school in order to care for animals, they were getting neutered and spayed. There were 180 cats and dogs combined. I was even shocked that there were so many people! I was a volunteer. I was supposed to carry and watch animals. The first animal i got was a cat, it was in a pillowcase so it would not get out and run because of all of the dogs.It was really fun with all of the dogs and cats, especially this one dog that rested on my lap.I remember him most of all. He was really hyper but I calmed him down. I heard dogs yelping because they did not want to get the shot, that was my least favorite part.

Then I left and met up with the Higgins boys. They were holding cute little puppies that were my soulmates. Of course, I had to hold one so i switched with Cooper. That was my favorite part. They were so cute! I just loved them! But then I got hot so I found someone who wanted to hold mine. Then I played tag with Vanessa and Tito. But then my time came, and I had to go. I was really sad, but I knew i would do it next year.

From Haley:
I knew the day was going to be great when I was handed a 8 month old puppy as soon as I got there. His owners were volunteers at the clinic, so he had to be taken care of while they were busy getting ready for the other people to come. So I sat on the bleachers with Melanie and her dog Corona and the puppy and played with him for about 2 hours. He was adorable, and he was also at the cute-puppy-gnawing phase, too. After a little while his daddy came and took over.

I wandered for a while and the crowds finally started to show up. There were these six dogs (three of them being little tiny puppies, by the way) in a huge cage. Someone gathered me, Zoe, Ashley, Oliver, Cooper, and Vanessa together and assigned us each a dog. The three little puppies were quickly snatched up by Oliver, Cooper, and Vanessa, leaving me, Zoe, and Ashley to take care of the other three. But of course, the girls got distracted when Mr.Higgins came with his two (apparently very adorable) cats, so I was left with three jumping, energetic, clingy, dirty dogs. To make matters even worse, sometime in which I was holding them all still in line, someone (I don’t remember who), dumped another, more nervous dog on me. So now I was trying (but not succeeding) to keep all 4 crazy dogs under control.

Eventually, I refused to put up with it anymore, so I took them all over to the bleachers and tied them up in different spots. But that just HAD to create another problem. They would all start barking if I left them alone for more than 30 seconds. So I went and took shifts petting them for about 2 hours. I then found out that two of the dogs’ numbers had already been called, so I took them over to get their sleepy shots and get them to surgery. Two down, two to go.

I got to relax a bit more after I got those two off my hands. I assigned Zoe to sit and pet the nervous dog while I wandered around, enjoying the fact that I was finally free. I went home for a few minutes for a drink of water and to go to the bathroom.

When I came back, the nervous dog’s owner had come back (where the heck had he been??????), so I handed the dog back to him. The last dog’s number had been called, so I took her over to get the shots, and laid her down in the ‘waiting for surgery’ spot.

I was free! Shortly after that, I went home. 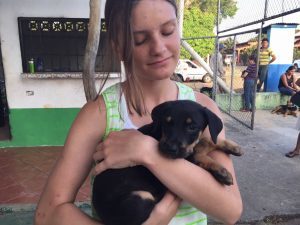 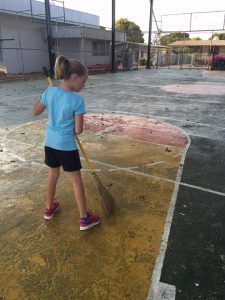 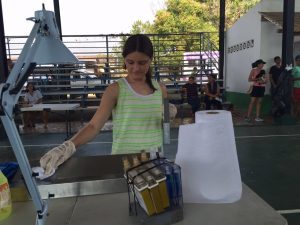