Zoe seems to be the poster child for contagious skin afflictions here in Panama. Our latest battle is with impetigo. It’s not really surprising since she spends 99% of her free time outside with other expat kids and whatever ailment is going around seems to spread through them all like wildfire.

Daniel noticed this latest problema last week. A sore on Zoe’s butt seemed like a really bad bug bite that was not healing so he suggested I take her to the clinic. So off we went to the Salud here in town to be seen by a doctor (cost: $2). He prescribed two different creams (cost: $2.65) and we used them for a week. No healing and in fact the sore spread and there are now more than 5 different spots that are agitated and not healing. So back we go to Salud yesterday and we saw a different doctor (cost: $2) and she said to continue with one of the creams and also prescribed an oral antibiotic (cost: $13).

I got the medicine at the local pharmacy and made friends with the pharmacist who was interested in our story and why I spoke Spanish so well (relatively, that is). He gave me his office and cell phone numbers and said to call if I had any problems at all. That was fortuitous.

The medicine comes in a bottle in powder form. He explained that I had to add water up to the line, shake it, use a syringe to get out 4.5ml and give that to Zoe every 8 hours. Can you count all the ways that something could go wrong? Well, the bottle is white, the powder is white and it’s almost impossible to see when the water is up to the line. I added what I thought was the right amount of water and the medicine was milkshake-like consistency. The syringe wouldn’t suck it up nor would it reach the liquid at the bottom of the bottle so I had to do what felt like a science lab of pouring it into a different container, sucking it up with only part of the syringe, and then forcing Zoe to take it. Evidently this stuff is nasty. If you’ve ever had that stuff you put on your nails to keep you from biting them Zoe says it’s like that only you have to swallow it. But we successfully got two doses into Zoe last night and this morning.

This morning, I consulted with my gringa friend Kim whose entire set of ninos had this same thing, and I told her of my troubles with the medicine. She said the consistency should be like water, not a milkshake, and clearly I had done something wrong. OK, so now I’ve way overdosed Zoe. No es bueno.

So I work on the bottle again, filling it with more water up to the line and I kept filling and kept filling because it just didn’t seem to be coming up to the line (spatial relations are not my thing) and pretty soon it is now overflowing. OK, so now I’ve messed up the medicine entirely.

So back I go to my new amigo at the pharmacy, I explain that I messed it all up and need to buy another bottle (cost: another $13) and could he please add the water for me. He was very amused (and not at all bothered that I was interrupting his breakfast in the back room which is also his house, I think). He got it all fixed up for me and indeed the consistency is much easier to work with. No less nasty tasting, but at least it’ll be easier to get out of the bottle. We discussed the nasty taste and he said there was nothing to be done. Really? I’m pretty sure this is a business opportunity that someone could profit from.

So now we have 4 more days of doses every 8 hours. This in itself is difficult for an active child who is not in school during this time and does not follow the normal hours of eating breakfast, lunch and dinner. And who sleeps for 10 hours due to the heavy physical activity in the hot sun for hours on end every day.

Here’s a picture of the medicine bottle and the line that you are supposed to fill the water up to. If you look very closely you might see how full it is now. Or not. 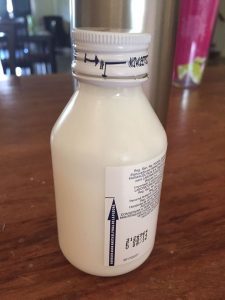