We’ve had a great week of meeting a few new friends. We told you about our new Canadian friends we spent a day with on Thursday. Then last night at the chino, Haley and I spotted a family that was clearly not Panamanian and they had three blond kids in tow! We struck up a conversation and today we met up at a nearby beach. It was awesome to get to know them and their adventure (Idaho to Hawaii to Costa Rica to Panama and next is Switzerland, after which they might be back to Central America). Their kids are close in age to ours and we had a great time chatting. Pedasi is a small town so at dinner tonight we ran into them again and continued our conversation.

We returned to the same beach we went to for Haley’s birthday. This time the kids saw a few more animals, including the very tame deer, a large iguana, a snake (he was in the process of being beaten by a worker, he was not part of the planned environment) a macaw and an emu. Phinny enjoyed chasing the seagulls and at one point he was so intent on getting them he ran head-long into the water, which he normally avoids. He loved rolling in the sand and playing with some other beach doggies. He’s a tired pup tonight.

There’s a big party going on at the square tonight complete with very loud music. And the evening wouldn’t be complete without a stop over at the neighbor’s house (they are sitting on their porch, naturally). They were happy to see Haley (they usually only see Zoe) and asked about Daniel. They said if he’d come over for a beer they’d teach him Spanish in no time! ha! I think they’ll have to settle for some friendly waves and “hola!” from him. 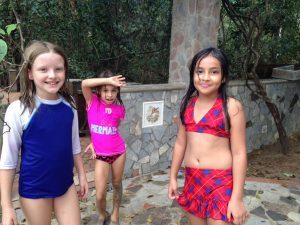