Today we’ll update you on the most exciting new development in our lives: COOKING.

Four little letters have made a huge difference in the life of our familia: LUCY. Lucy is a 19 year old young lady from Australia. She has lived here in Panama for the last 6 years. She and her family have integrated fully into the community here, attending the local school (we are following in their footsteps) and involved in the local community via owning businesses and speaking fluent Spanish. Lucy was even voted Senorita Pedasi a few years ago. Lucy is finishing up her online homeschool from Australia and responded to our search for a part time cook. She plans to attend culinary school and has visions of opening up a restaurant of her own so she comes with a lot of experience and enthusiasm for cooking. When we heard that she previously worked in the kitchen cooking for the Prince of Lichtenstein (he has a house near here, having married a Panamanian) we knew she was good enough for us. ha!

She started last Monday and it’s amazing!! She comes to the house, having done all the shopping (which has to be done just about daily) around 5 or 5:30. She gets right to work in the kitchen and pretty soon these awesome smells start coming out. It’s really an experience when there are amazing smells but I am not the one responsible for creating them! While she is here I try to pay attention to what she is doing, get some tips, and also practice my Spanish with her. Other times I try to do things that I don’t always have time for: Phinny walks, pedicures or movies with Zoe, etc. Sometimes I sit around and watch 80s videos with Daniel but I feel kinda guilty doing that too much. Daniel seems to have no guilt!

We have arranged for her to come 4 nights a week to cook dinner. The other three nights we’ll probably go out to eat. ha! But even with just 4 nights she makes enough to have a lot of leftovers which give us nice lunches the next day, and our friends have benefited from those leftovers too. It’s also great when she can come to the house and get dinner going when we are not at home, which allows dinner to still be on time even if we are late getting back from errands or some day trip.

So far Lucy made sancocho (a traditional Panamanian soup), beef with broccoli, porcupine balls (not made from porcupine meat – google it if you don’t know) and tonight we had terriyaki chicken and homemade chocolate chip cookies. She even makes the rice taste better than mine!

Daniel has a whole list of items he’ll be requesting from Lucy very soon. I’ve seen the Krispy Kreme donut recipe floating around so I have a feeling that will be a weekend experiment sometime soon. Gluten free chocolate chip cookies and brownies cannot be far behind.

Before you start thinking that our names have changed to Money Bags Magoo, hold that thought. We determined early on that one of the things we’ll be able to do here is have more domestic help than we had in the US. But the only way we could do that is if we were able to pay Panamanian prices for labor. We pay Lucy more than the going rate for a Panamanian but less than minimum wage for an American. The very reasonable rate allows for her to get some experience and spending money and us to get caught up on our 80’s videos. Oh, and no post-dinner meltdowns from yours truly. It’s all good. Really good. 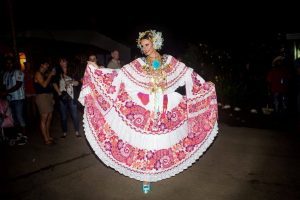 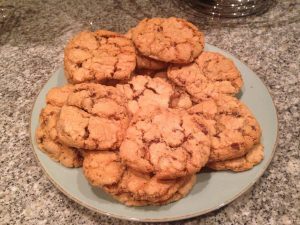