School started today! For real! Zoe was up and energetic very early. School is always so good for her, the extrovert that she is. It was a rare rainy morning (usually whatever rain we have stops by early morning) so we decided to drive because the road to school from our house is dirt and it would be very muddy. Normally we will walk to and from school but we may wait until we move off the dirt road to start that. And our new house is closer, as well.

The school has no parking lot and no drop off lane (we aren’t in Gilbert anymore, Toto!) but pretty much no problems parking. It’s a small town, kids walk or are bussed to school from neighboring towns. I didn’t see anyone else dropping off their kids in the car.

We met up with the secretary and she took us to Zoe and Haley’s classrooms. Zoe found a place to sit while I got Haley settled. I went back to check on Zoe and then her teacher arrived (Maestra Nelsa). She was very sweet and gave Zoe a big hug. When she saw where the other classmates had found a desk for Zoe she deemed it too far away from the front (“She must learn Spanish!” she told me) so she moved the desk front and center. Haley appeared again (time elapsed: 90 seconds) and said “It’s evidently free time now and I have three friends.” Which for Haley meant, “I have 3 girls that have made me join them.” I chatted with Zoe’s teacher a little more and then left. Zoe looked a little panicked but with the bribe of a stuffed unicorn if she managed the drop-off well she did not break down crying or cling to me (this is her usual response to these types of situations). I ran into Haley on my way out of the school and she was being given a tour with her new amigas. The other girls looked smitten. Haley looked mildly amused.

From this point I’ll just describe Zoe’s day because Haley will be our guest writer to describe her day.

Dan and I went to pick Zoe up at 11:30am (4 hours goes by fast when it’s the first time you’ve been without your kids for that long in 6 weeks) and she came out all smiles. She had a friend in tow and started introducing us to her when another girl came up and found us. Zoe looked confused and then introduced the new girl as her friend. Evidently the first one was just some passerby that Zoe THOUGHT was her new friend. Soooo now we have two girls, only one of which is her actual friend. The other is a confused stranger. Dan and I did not know this. We just thought Zoe had two new friends. Evidently, Zoe can’t quite tell her classmates apart yet. Ha! They do all look very similar with their uniforms and dark hair. After the mistake was discovered, Zoe, ever so gently, told the impostor to move along. As best as she could anyway, with neither of them knowing each other’s language. At this point, we were still very confused, so we didn’t know to interject into the situation. Fortunately, the impostor seemed oblivious to it all. But I’m sure she’s telling her mom quite the story about the new gringa girl introducing her to her parents and then being dismissed. I’m embarrassed just typing this.

Zoe said she had a great day and it was awesome to hear her describe the activities using so many Spanish words. She seemed to be doing similar math as the class. She was working from her homeschool workbook when the class was doing their lessons in math. She participated during English and she learned enough to know she needs some supplies for some art project tomorrow. She even went to the cafe and had some milk, chicken and rice and bought some juice. I honestly don’t know how they have time to do all that eating in only 4 hours!

She reports that the bathrooms are pitch black, do not having locking doors and no toilet paper. The classrooms are not air conditioned and she was pretty hot so she’ll wear her hair in a pony tail tomorrow to get it off her neck. And evidently her hair was pretty popular given how many people were “petting” her saying “oooh suave!”.

According to Zoe her teacher is nice but strict. When the class would get too rowdy she would slap her ruler on the desk three times and screech, at the top of her lungs, “silencio!”. It was rather startling for Zoe at first but it became pretty commonplace fairly quickly.

From a parental perspective, it’s a little strange not knowing what’s going on at school – moreso than usual. The girls report things that they need to know/do/bring for tomorrow but I have no idea if they are right. Did they understand correctly? Who knows. But there are no notes sent home, no teacher emails, no weekly newsletters. So I guess it’s all on them to figure it out. I assume they’ll also figure out if school for the next day is cancelled.

We did some homeschooling once the girls got home from school. It was not a smooth transition back into homeschooling, I’ll be honest. The house we are in now does not have a table inside, we have not fully unpacked and there’s a constant fan blowing the papers around. Not so conducive for concentration. And Zoe’s lack of sleep didn’t help matters either. We’ll get the hang of it but we are looking forward to our permanent home that will have a better arrangement for school work.

The early afternoon release from school allows for lots of time for lunch, getting a few groceries, homeschool and free time. Two thumbs up from this mom and dad.

This is Haley again with another post from my perspective. Today was my and Zoe’s first day of school in Panama. Let me just start off by saying that it’s really short. My day is 5 1/2 hrs and Zoe’s is 4.

When I first got there, I was pretty nervous, because if you think about it, it’s pretty scary going somewhere for 5 1/2 hours where they don’t speak your language and you don’t know anybody. Although that didn’t last long because a group of girls from my class (there were about 5 of them) immediately claimed me as their friend. Not that I had any say in this arrangement. They showed me around the school for a little bit before school started (such as the bathrooms, playground, other classrooms, etc.)

When the bell rang, we went back to the classroom and sat down. Then chaos reigned. Not that I’m complaining, but the teacher honestly did not care what you were doing whatsoever. Unless you were getting in a fistfight (a couple of those sparked) she didn’t care. Sometimes, the teacher would scream above all the noise and calm would wash over momentarily, but the chaos would come back a few minutes later.

Now I know what you are thinking. “This is an awful school. They aren’t learning anything!” It wasn’t really like that. The teacher would eventually get the kids under control and there would be some learning for about an hour or so. It wasn’t always chaotic. When it got a little quieter, I worked on some of my homeschooling work for a little while.

At some point this kid (he was about 10 or so) barged into the room screaming “LECHE!” (which means milk in Spanish) and all of my classmates got up and swarmed him. I apparently had a very confused look on my face because my friend explained to me that LecheBoy went around to all the classrooms every day handing out milk from the school. I picked the chocolate milk

Another weird thing about my day was that the teacher, at random times, would just get up and leave. Sometimes it was only a few minutes, sometimes it was 20 minutes. No warning. That was when it was the most chaotic. Other staff would come by and peek through the squares in the walls (there are no solid walls in the entire school… instead, there are decorative holes in the bricks, to capture the breeze since there is no air conditioning) and notice how noisy and obnoxious we were being, and leave. No telling us to quiet down or anything. Cool.

Today has been a very interesting day. I can’t wait until tomorrow. 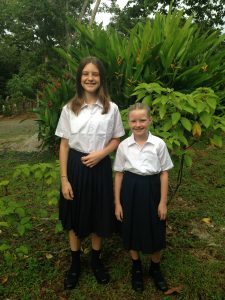 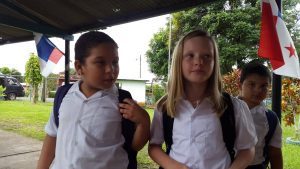 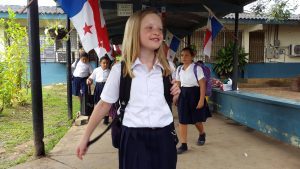