Allison has handed the daily reporting over to me, Dan, for tonight. She has an emergency staff meeting with her pillow. I’ll make an attempt to not offend anyone, but I can’t promise anything. And, no, the lazy monkey comment does not refer to me.

Today started with one of the most awful sounds you can hear when on vacation. An alarm. At 7:15 am, no less. Me. No. Happy.

This next part, needs a back story. When we were picked up at the dock the night we got here, a taxi van took us to the B&B we’re staying at and there was a guy that went along with us that took advantage of his captive audience and proceeded to extol upon us the virtues of the “Penga” (sp?) boat that he works for, drives, washes… I don’t know. But he insisted that he’d be back to pick us up in the morning to pick us up for our tour. I believe his quote was $175 for the day of island hopping. Well, sure enough, he was at our breakfast table this morning and the timing couldn’t have been better. For a joke writer, that is. Candace, our wonderful journey coordinator extraordinaire, was just then receiving a call from another boat company that we were planning on going with at the suggestion of our B&B owner. It was hard watching this unfold. The taxi guy was standing there waiting for us to gather our things up for the day to pile into his taxi but instead, ended up listening to Candance receive the quote (which she said out loud) of $150 and she was confirming what time he’ll be at our beach to pick us up…etc. It was sad to see the taxi guy slink down the pathway towards the front gate of the compound, after realizing he wasn’t going to be our tour guy that day.

The first picture is of Allison and some of the kids making their way to the beach in front of our B&B, so we could wait for our tour boat guy to arrive.

We finally get everyone on the boat and as you’ll remember from one of our previous postings, Zoe had a VERY hard time on the boat coming over from the mainland. As you’ll see in the picture attached, she was no longer having any troubles, whooping and hollering and putting her hands up like she was on a roller coaster ride. If only we adults could conquer our fears as easily.

The first place we went to was a place they call Dolphin Bay. It’s where you can see dolphins in the wild. Well, we waited around for about 30 minutes and saw a couple of partial breaches where we could see a dorsal fin and that was about it. Although, the same area is full of jellyfishes. So we saw a lot of those.

Next stop was a quick drive (float) by some mangroves wherein we were able to see some beautiful starfish in the shallow coral reefs around the mangroves. The water is super clear and really beautiful.

Next place was a place where there is a restaurant wherein they attempt to legally extort money from you in the guise of selling you food. The tour boat operators get a little kick back if you have lunch there. But the cheapest thing on the menu was close to $15. We talked to our boat Capt and asked him if there was something better for the kids (read: cheaper) at our next island. He acknowledged there was and so we spent the rest of the time at this place snorkeling around the dock area. We also saw the very large and colorful birds (pictured) on this island. Allison snorkeled for the first time in her life, here. It was really pretty. The entirety of the surroundings looked like something out of a novel. Just gorgeous. I didn’t like that we had to rent some snorkel gear for a buck each. I was convinced we were all going to get Ebola from those things. Ugh!! Our wonderful travel partners, the Smiths, had their own gear. Which means they will not be contracting Ebola. Lucky them.

Okay… the next island. Wow. Red Frog Beach is on an island that is your typical jungle island. We disembarked from our little boat and quickly realized that the dock infrastructure is older than any of us and hasn’t been fixed or renovated, EVER. You find yourself wondering when your last tetanus shot was. You go past a little wooden hut/counter wherein you try to figure out who you’re supposed to pay in order to officially enter the island. There are several guys there, some of whom are playing a board game. We finally figure out which guy has enough time in his day to take our $3 per person donation to the “keep the dock as dangerous as humanly possible” fund.

We’re on the island finally. But you really can’t imagine there being a beach on this island because from the side that you approach it on your boat, it looks like you’re typical mangrove kind of island. We start off by walking on this wooden pallet path that, again, is extremely unsafe and would be shut down by OSHA lickety split. But only after giving their inspectors a heart attack. Then the centuries old wooden path ends and you’re on a dirt path the rest of the way. I have some pics here that show the path. We stopped and ate at a very nice (brand new) outdoor patio kind of restaurant. The food was cheaper than the first place, thankfully. Although still touristy prices. After eating some great red snapper sandwiches and fish and chips and smoothies and other such goodies, we mosied along to the beach finally.

I say again… wow! The ocean is a beautiful light greenish blue. The sand is sugary. The jungle leads right up to the sand. It really is a site to behold. If you ever get a chance, you must go to this beach. The surf was gentle but fun. And this trip is our first experience with the ocean waters in Panama. The water is some of the warmest ocean water I’ve ever swam in. It was delightful.

When we first got there, a Panamanian boy came up to me and asked if I wanted to buy a papaya or empanada or banana… I don’t know… something. I said no but I was thinking I’d love to see if this kid could find us a sloth while we’re on the island. So we said that if he can find us a sloth (they call them “lazy monkeys”), we’d give him $5. Off he went… about 30 minutes later, he comes running back. Sure enough, he found one. Unfortunately, he didn’t tell us that it was a good walk away. We had to walk about 10 minutes down the beach and then inland, down a road for another 10 minutes. Mind you, it’s HOT here! We all wanted to be back in the water. But we couldn’t pass up this sloth sighting. I have two pictures here. One is of the tree he is in. Then the next one is a close up of his actual location. So it wasn’t REALLY close up, but it was right above us and we could see his little face staring down at us because of all the noise we were making.

We hated to leave Red Frog Beach, but alas it was time to go. We met our boat guy back at Death Trap Dock, and headed home for the day. He dropped us off in front of our B&B. About an hour later, after a much needed shower by all, we took a taxi into town (about a 7 minute drive from where we are) and had some nice tasty and relatively inexpensive food. The Smiths have a son, Cyrill, who turned 14 today. So we had a birthday dinner for him at a big outdoor restaurant. The whole restaurant (well, some of them anyway) was in on a happy birthday song (Spanish version) after the fire dancers did their thing. Happy Birthday, Cyrill!

I also managed to get a picture of Zoe completing a shopping transaction for a bracelet. She LOVES the street vendors here and they definitely love her.

Tomorrow, a boat trip around the island that we’re staying on. I hope my sunburn doesn’t get a sunburn. Ciao! 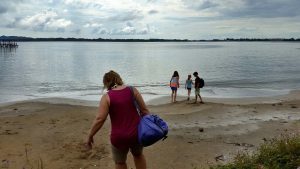 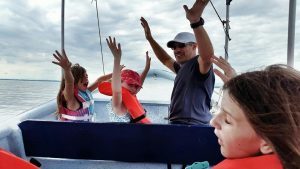 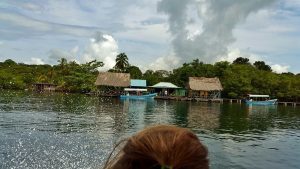 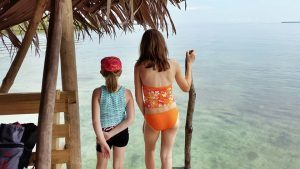 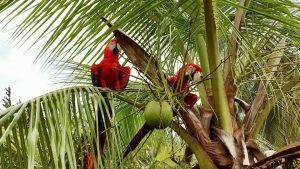 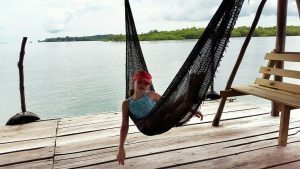 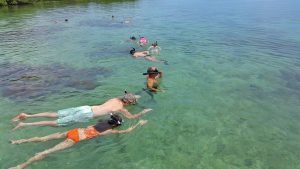 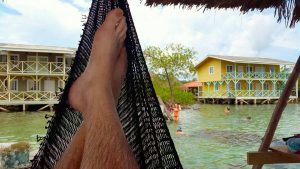 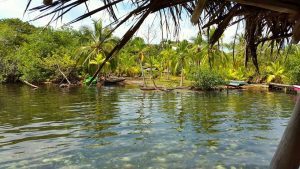 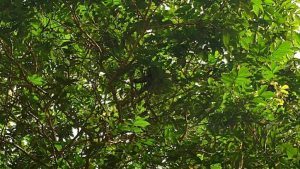 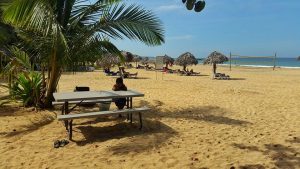 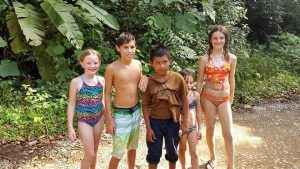 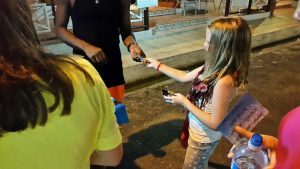