We are back in Boquete and it’s raining (of course). Between the rain and the thought of Spanish school tomorrow Dan is pretty depressed. But after the adventure we had today, Spanish school will be a welcome return to our new normal.

We got up and had our usual awesome breakfast made by Dama at the BnB in Bocas. The kids chased the chickens for awhile, compared sunburns and bug bites and then packed up. Whenever the 9 of us have to be transported with our luggage it’s quite the scene. Luggage, backpacks and purses, snorkel gear, two styrofoam coolers that have to be hand carried, etc. But we made it into one taxi and got dropped off at the water taxi station. We got tickets and were told it would be about 45 minutes.

At this point I’m noticing how much luggage we have and how we are on a narrow dock with no railings in most places. And we have kids. I was pretty sure we would lose SOMETHING into the water. About 10 minutes later we lost a water bottle. I was right but at least it was something small.

A little while later a boat pulled up and a bunch of people piled in. They seemed like they came after us so we agreed that when the next boat came we would be pushy and pile in first. But then they called our names and told us to get into the boat. Uhhhhh really? There did not seem to be enough seats for us nor space for our luggage. We tried to say we’d wait for the next boat but they would have nothing of it and started throwing in our stuff, so we piled in too.

Then came a long discussion among the boat guys about life jackets. We did not have enough for everyone on board (this similarity to Titanic was not lost on me). There was much discussion, looking around, talking and pointing. Finally they took life jackets from people in the center and put them on people on the edges, so as to try and fool any policia that might be watching. All Smiths and Shermans except for Candace had life jackets so we didn’t protest. The others who had none didn’t protest either so off we went. We did manage to pick up two more from a passing boat but we were still short by 4.

We had a LOT of people in this boat. Like, 19 or something. And this was a little rowboat type thing with a canvas top and a motor. (Dan just said I’m exaggerating but this isn’t his post, now, is it?) I think it might have had a steering wheel but I’m not sure. It was SMALL. And we sat LOW in the water. We took off and once we got out of the harbor area we hit some rougher waters. (Again, Dan says I’m exaggerating.) Between the number of people on board and the rough waters it was just too much for me. I panicked and started crying. Like full-on sobbing. Candace and Zoe were behind me trying to comfort me. The Panamanian little boy next to me switched places with his mother so she could comfort me and she even handed me a bucket in case I needed to barf (that was not my problem, I told her). It was bad. I knew it was really illogical because there were tons of boats around, the water was warm and we really weren’t that far from some shore of some kind, but still it was just a culmination of being so far out of my comfort zone for a lot of the last three weeks. The tears just wouldn’t quit for a good long time. The lady next to me told me it would be only 10 more minutes, but of course that was Panamanian time because it was about 20 more.

We finally hit some calmer waters and I started to settle down and felt rather foolish, but I thanked the lady next to me profusely. Meanwhile Zoe, who sobbed most of the way TO the island was not at all concerned about her sobbing mother. Haley and Dan were in the front with more of the Smith kids. Haley predicted my panic based on the waters but didn’t see the cry-a-palooza.

So we get to the water taxi station and there was chaos getting out of the boat. There were our kids and suitcases and coolers going every which way with guys who were promising us taxis at the same time we were trying to get our bearings and figure out where the cars were parked. We got it figured out and realized we were less than a block from the cars so we started walking but our taxi helpers wouldn’t let us off that easily and we had four guys carrying some of our luggage.

We get about halfway to our cars and I hear a noise behind me and it’s Haley, whom we had apparently left behind when she went to the bathroom. I’ll have no need to write my mother of the year speech this year.

OK, a quick head count of the kids and we continue to the cars. We get there and are happy to see our cars safe and sound, but then we see the flat tire on the rental car. We aren’t totally surprised, we pulled a screw out of the tire in Boquete before we left, but we had watched it along the way to Bocas and it was fine. Ooooh K. The parking lot guy has a guy (probably his cousin) who can change it for us. “Johnny Boy” showed up and under the supervision of Cyril, Robert and Daniel, got it all done. We paid him $5 and off he went. Thankfully the tire was a full size tire and not just a little donut spare.

We hit the road but first a stop for gas and a little air for the tire. Then we try to start the car again and…. nothing. Dead battery. Oooooh K. A taxi driver who was getting gas tried to help get it going but no one had jumper cables. He said there would be no stores open to buy any today but you never take the first answer you hear in Panama. So Dan and I headed back to see if Johnny Boy might have a cousin who could help us but along the way we find a hardware store open and for $8.25 we have ourselves a brand new pair of jumper cables. Back to the gas station where the Smiths were calling the BnB we stayed at to arrange for a return of some of their valuables they had left. Meanwhile, another taxi guy was about to switch his battery into the rental car to get it started and then remove it…etc. But there was not no need since we pulled up with jumper cables. We jumped the car, got air in the tire and off we drove.

We drove back on the same windy curvy road we took to Bocas and are reminded of the ginormous potholes in the road that make you feel like you are in a video game. These are tire-swallowing potholes. They were crazy and we hit one so hard (with the tire we just changed) that we had to stop and inspect. Thankfully it seems to have done no damage but it was big.

The road did not seem to be as bad as when we came… no heavy rain to speak of and only a little spot of clouds and fog. We celebrated the end of the forest area with a stop at a lovely little coffee shop in the middle of nowhere. They served us hamburgers (they tasted funny, we wondered if it was dog meat) and donuts that had a bug in the frosting. But it was a nice break and there was a beautiful little waterfall right next to it. The Smiths talked to a guy there about renting horses for a day of riding. Their oldest, 15 year old Melanie, loves horses.

We stopped at the cool watering hole that we found on the way to Bocas, but it was a much rougher water that was no longer clear. Seemed like there had been some flooding or could be more, so we decided to come back another day. No need to test our luck any further today.

We arrived safely back in Boquete and got back to our rental houses and it felt positively like home. We were back for about 30 minutes and decided we missed the Smiths so we met up with them for a lovely dinner in town. Getting dinner was complicated by the fact that 1) it was pouring 2) it’s a Sunday and most of the town is closed and 3) there is a marching band that is CONSTANTLY practicing for next week’s holidays and wherever they are, the roads are closed. At one point we had to separate – The Smiths went to look for an open restaurant and the Shermans went to figure out where the band was and how to get around them. The place we ate at had outdoor dining under a tin roof, so between the rain and the nearby marching band we had to yell our entire conversation over what turned out to be yummy Mexican food.

It’s possible that tomorrow will be boring when compared to the last three days, but I’m good with that. I could use a little boring for awhile. 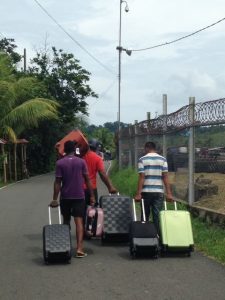 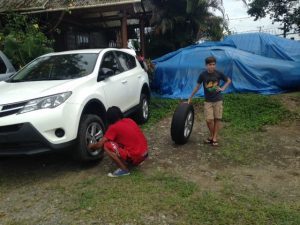 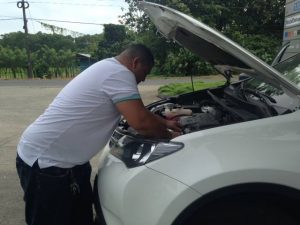 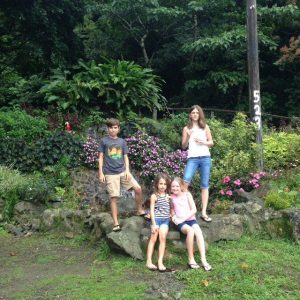 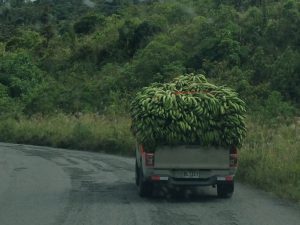